Breaking News
Loading...
Home » sports » Does Marquez Have A Right To Complain

Does Marquez Have A Right To Complain 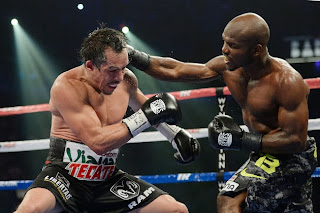 Once again, Juan Manuel Marquez claimed that he was robbed by Las Vegas judges of the victory he and trainer Ignacio “Nacho” Beristain were convinced he deserved in his split-decision loss to WBO welterweight champion Timothy “Desert Storm” Bradley, and his constant griping may have conceivably lost him some fans.
Top Rank promoter Bob Arum conceded that much in a conversation with Yahoo Philippines but sought to explain the basis for the complaints of the Mexican’s camp.
In a cutting comment, Beristain said Bradley was the only undefeated fighter with two losses, obviously referring to the universally condemned split decision win over Manny Pacquiao in June last year, although it should be pointed out that Marquez has complained in nauseatingly regular fashion that the judges robbed him of the first three fights against Pacquiao, forgetting he was dropped four times in their first two fights.
In Arum’s assessment fight fans need to appreciate the difference in perception of judges in Las Vegas and other US venues in the West and New York and similar venues in the Eastern United States.
The astute promoter felt that if the Bradley fight was held in the Eastern United States, Marquez would have won by seven rounds to five. But since it was staged at the Thomas and Mack Center in Las Vegas, the boxing capital of the west, Bradley won by seven rounds to five which in a way reflects the scoring in the split decision win by Bradley.

The difference in scoring is anchored on the fundamental philosophy of the judges and the location of the fight.
Simply put, Arum said that “when Mexicans score a fight and in the US East they would have scored the fight for Marquez because he landed the more telling blows and was continuously the aggressor.”
However, in the West it was a different story and “Bradley won because he landed more punches.”
The predominantly Mexican crowd at the Thomas and Mack Center last Saturday failed to accept or understand the decision because, as Arum pointed out, “Mexicans are brought up to vote for aggression and power punching. There is no question about the fact that on that score Marquez won seven rounds. But in Nevada and other places in the US East they don’t score that way” and Arum himself, following the mindset of judges in the east, credited Bradley winning seven rounds to five. "It depends on what place the fight is held.”
As Bradley himself pointed out, the idea was to hit and not get hit, which is a page off the Mayweather boxing bible.
There have been several fairly lengthy articles on how to score a fight. One of them in Neutral Corner, The Armchair Boxing Judge states that boxing scoring “is primarily determined by which fighter presses the action, controls the tempo, and lands the more telling blows. In boxing terms it is often referred to as effective aggression, clean punching and ring generalship.”
The scorecards of the three judges in the Bradley-Marquez fight. (Courtesy of Ronnie Nathanielsz)
If we apply this basic criteria to the Bradley-Marquez fight then we could agree that Marquez pressed the action because he had to since Bradley was fighting according to a sound gameplan which was to use the jab, move in and out quickly, and throw combinations banking on his speed and footwork.
These are the more important elements in an effectively executed strategy and we heard that being reiterated by trainer Joel Diaz who kept telling Bradley to box and basically not to get caught up in a slugfest like he did against Ruslan Provodnikov.
This is what judges – at least in the US West - look for in deciding who has the advantage at the end of each round.
It was pointed out in the article that “unfortunately these differences can be difficult to discern in closely contested bouts where sometimes even a slight advantage in defensive skills can be justification enough to give one fighter the edge over another."
Share:
Newer Post Older Post