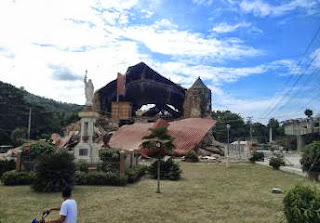 The 7.2 magnitude earthquake that hit Bohol Tuesday morning was 32 times as strong as the atomic bomb dropped on Hiroshima in World War 2, state seismologists said.
"The magnitude 7.2 earthquake is within the category of a major earthquake.. A magnitude 7 earthquake has an energy equivalent to around 32 Hiroshima atomic bombs," said Renato Solidum, director of the  Philippine Institute of Volcanology and Seismology (Phivolcs).
The Bohol quake was even stronger than the 2010 Haiti earthquake, he added.

Record-breaking quake
"Compared to the 2010 Haiti earthquake, that had a magnitude of 7.0, this one had a magnitude of 7.2, slightly stronger," he added. The earthquake that struck Haiti in January 2010 claimed over 300,000 lives, according to the United States Geological Survey (USGS).
Tuesday's earthquake is also the strongest to hit Bohol in 23 years, the second having a 6.8 magnitude last February 1990, Solidum said.
Solidum said the 1990 earthquake damaged churches, roads and bridges in Bohol. It also triggered a tsunami since the earthquake occurred offshore, he added.
"(But) the earthquake this morning occurred inland so there was no possibility of a wave," he noted.
Solidum said the quake rocked the East Bohol fault found on the southeast side of Carmen.
The fault also moved vertically, he added.
As of press time, at least 32 people were killed due to the earthquake that rocked Bohol and nearby provinces 8 a.m. Tuesday. The earthquake also crumbled historical churches in Cebu and Bohol.

Solidum said Cebu and Tagbilaran, Bohol suffered from an intensity 7 earthquake sourced from the epicenter; Iloilo, some parts of Guimaras, Negros Oriental, Camiguin Island and Northern Mindanao with intensity 5; and Negros Occidental and Dumaguete City with intensity 6.

"The quake was tracked as far as northeast of the Bicol region like Sorsogon and also Masbate, as far as south as Davao city and also Zambaonga," he added.

Solidum said Phivolcs has recorded at least 110 aftershocks, with the highest at 4.5 magnitude at around 9:55 a.m. "Please note that the aftershocks can still be felt within the day, and tomorow and the next several days but we expect the aftershocks to further diminish in number with time," he said.
Damaged national treasures
Meanwhile, the National Commission for Culture and the Arts (NCCA) is concerned over the extent of damage to the centuries-old churches in Bohol in the aftermath of the quake. The agency is calling on the public to stay away from the damaged churches so as to keep safe as well as to minimize damage to the structures.
“We appeal to the public to safeguard the national cultural treasures and important cultural property in Bohol. We ask that the public cooperate in preventing unnecessary incursions into the damaged sites to keep themselves safe from injury,” Angeles said Atty. Trixie Angeles, NCCA Legal Consultant and Vice Chairman of the National Committee on Monuments and Sites
Share:
Newer Post Older Post