The City of Vigan Ilocos Sur 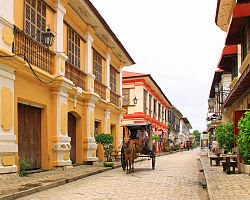 The City of Vigan (Ilokano: Ciudad ti Bigan; Tagalog: Vīgân) is a fourth class city in the province of Ilocos Sur, Philippines. It is the capital of the Province of Ilocos Sur. The city is located on the western coast of the large island of Luzon, facing the South China Sea. According to the 2010 Philippines census, it has a population of 49,747 people.
It is a World Heritage Site in that it is one of the few Hispanic towns left in the Philippines, and is well known for its cobblestone streets, and a unique architecture that fuses Philippine and Oriental building designs and construction, with colonial European architecture.
Former Philippine president Elpidio Quirino, the sixth president of the Philippines, was born in Vigan, at the current location of the Provincial Jail (his father was a warden); and resided in the Syquia Mansion.
Due to silting of the Mestizo River, Vigan City is no longer an island and no longer separated from the mainland. The city is unique in the Philippines because it is one of many extensive surviving Philippine historic cities, dating back to the 16th century.
Vigan was a coastal trading post long before the Spaniards arrived; Chinese traders sailing from the South China Sea came to Isla de Vigan (Island of Vigan) via the Mestizo River that surrounded it. On board their ships were seafaring merchants who came to trade goods from other Asian kingdoms in exchange for gold, beeswax, and other mountain products brought by the indigenous peoples from the Cordilleras region.
In the book The Philippine Island (Vol. III, p. 276, Blair and Robertson) two letters from Governor General Guido de Lavezaris to King Philip II of Spain mention: "It seemed best to send Captain Juan de Salcedo with 70 or 80 soldiers to explore the coast of Los Ilocanos on the shores of the river called Bigan." The Spaniards marched north from Manila on May 20, 1572 and arrived in Vigan on June 12, 1572.
Thus, after the successful expedition and the exploration of the North, Juan de Salcedo founded "Villa Fernandina de Vigan" in honor of King Philip II’s son, Prince Ferdinand, who died at the age of four. From Vigan, Salcedo rounded the tip of Luzón and proceeded to pacify Camarines, Albay, and Catanduanes. As a reward for his services to the King of Spain, Salcedo was awarded the old province of Ilocos, which consisted of the modern provinces of Ilocos Norte, Ilocos Sur, Abra, La Unión and part of Mountain Province as his hacienda (estate), and was accorded the title of "Justicia Mayor de esta Provincia de Ylocos" (Province Mayor of Ilocos).
In 1576, Salcedo returned to the capital of his encomienda (trusteeship), Vigan, bringing with him his soldiers and some Augustinian missionaries to pioneer the evangelization of the Ilocos region. He established a Spanish city for the purpose of controlling the neighboring country.
Share:
Newer Post Older Post