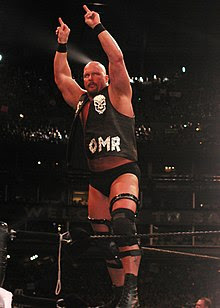 Steve Austin (born Steven James Anderson; December 18, 1964), better known by his ring name "Stone Cold" Steve Austin, is an American actor, producer, and retired professional wrestler signed to WWE in a Legends deal. Austin performed for several wrestling promotions such as World Championship Wrestling (WCW), Extreme Championship Wrestling (ECW) and the World Wrestling Federation (WWF). Declared by WWE (formerly WWF) chairman Vince McMahon to be the most profitable wrestler in the company's history, he gained mainstream popularity in the WWF in the late 1990s as "Stone Cold" Steve Austin, a disrespectful, beer-drinking antihero who routinely defied the establishment and his boss Mr. McMahon. Austin has been described as the industry's biggest star in the late 1990s and early 2000s, and the "poster boy for the WWF's Attitude Era."
Austin held 21 championships throughout his professional wrestling career, and is a 6-time WWF Champion as well as the fifth Triple Crown Champion. He was also the winner of the 1996 King of the Ring tournament, as well as the 1997, 1998 and 2001 Royal Rumbles. He was forced to retire from in ring competition in 2003, due to a series of knee and neck injuries. Throughout the rest of 2003 and 2004, he was featured as the Co-General Manager and "Sheriff" of Raw. Since 2005, he has continued to make occasional appearances, and was inducted into the WWE Hall of Fame in 2009 by Vince McMahon. In 2011, Steve Austin returned to WWE to host the reboot of the reality series Tough Enough.

After King of the Ring, Austin was left without a feud as Benoit was lost for the next year after neck surgery and Jericho moved on to other things. He began a small spat with Angle over who was McMahon's biggest supporter. Meanwhile, the purchase of World Championship Wrestling by McMahon began to bear fruit as The Invasion began. McMahon was not able to fight off the invading WCW wrestlers, and when they formed an alliance with a group of Extreme Championship Wrestling alumni that were signed to the WWF and both Shane and Stephanie McMahon were now aligned against their father, McMahon's empire began to crumble and he had zero help from his two biggest stars at the time. Austin made it known that he was against teaming with Angle, whom Austin saw as both a threat to his WWF Championship, as well as an annoying tag-along.
Finally, a frustrated McMahon called Austin out and demanded that he bring "the old Stone Cold" back, even going as far as asking Austin to give him a Stone Cold Stunner, so he could effectively captain a team of WWF wrestlers in a ten-man tag team match at the upcoming InVasion pay-per-view in July. A dejected Austin initially refused, but on the following edition of Raw he returned to his old ways and hit Stunners on every member of the Alliance. Then, at InVasion, Austin captained the WWF team consisting of himself, Angle, Jericho, and the Undertaker and Kane against the team of WCW's Booker T and Diamond Dallas Page and ECW's Rhyno and the Dudley Boyz. Late in the match, however, as Angle had Booker in the ankle lock, Austin turned on Angle by Stunning him and joined the Alliance. The reason why Austin did this was that he felt McMahon was grooming Angle to take over his spot, that he was trying to get in touch with The Rock to return, and that he himself was "unappreciated" when McMahon insisted he return to the old Austin. Austin was immediately made the Alliance's new leader and began to feud with Angle over his WWF Championship.
Also, during this time, Austin would begin his "What?" catchphrase, which he would say randomly while giving a promo. The catchphrase eventually would start to go over with the fans towards the end of the Invasion, and is still coined by the fans to this day.
Share:
Newer Post Older Post