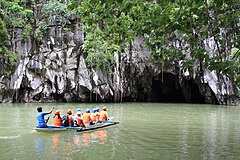 The Puerto Princesa Subterranean River National Park (a.k.a. St. Paul's Subterranean River National Park) is a protected area of the Philippines located about 50 kilometres (30 mi) north of the city centre of Puerto Princesa, Palawan. The river is called Puerto Princesa Underground River or St. Paul Underground River. The national park is located in the Saint Paul Mountain Range on the northern coast of the island. It is bordered by St. Paul Bay to the north and the Babuyan River to the east. The City Government of Puerto Princesa has managed the National Park since 1992. The entrance to the subterranean river is a short hike from the town Sabang.
In 2010, a group of environmentalists and geologists discovered that the underground river has a second floor, which means that there are small waterfalls inside the cave. They also found a cave dome measuring 300 m (980 ft) above the underground river, rock formations, large bats, a deep water hole in the river, more river channels, another deep cave, as well as marine creatures and more. Deeper areas of the underground river are almost impossible to explore due to oxygen deprivation.
On November 11, 2011, Puerto Princesa Underground River was provisionally chosen as one of the New7Wonders of Nature. This selection was officially confirmed on January 28, 2012.

The park has a limestone karst mountain landscape. St. Pauls Underground River Cave is more than 24 km (15 mi) long and contains an 8.2 km (5.1 mi) long underground section of Cabayugan River. The river winds through the cave before flowing directly into the South China Sea and is navigable by boat up to 4 km (2.5 mi) in from the sea. The cave includes major formations of stalactites and stalagmites, and several large chambers, including the 360-meter-long Italian's Chamber with approximate 2.5 million square meters volume. It is one of the largest cave rooms in the world. The lower portion of the river up to 6 km from the sea, is subject to tidal influences. Until the 2007 discovery of an underground river in Mexico's Yucatán Peninsula, the Puerto Princesa Subterranean River was reputed to be the world's longest underground river.
The area also represents a habitat for biodiversity conservation. The site contains a full mountain-to-the-sea ecosystem and has some of the most important forests in Asia. It was inscribed by UNESCO as a World Heritage Site on December 4, 1999.
Share:
Newer Post Older Post