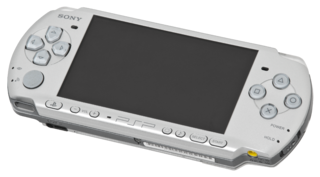 The PlayStation Portable is the only handheld video game console to use an optical disc format, Universal Media Disc (UMD), as its primary storage medium. Other distinguishing features of the console include its large viewing screen, robust multi-media capabilities, and connectivity with the PlayStation 2, PlayStation 3, other PSPs and the Internet.
After the release of a slimmer, lighter, remodeled version of the PlayStation Portable (the PSP-2000/"Slim & Lite") in early September 2007, sales quadrupled in the United Kingdom the following week and increased by nearly 200% in North America for the month of October. This model was later replaced by another remodeling, the PSP-3000, which included a new screen and an inbuilt microphone. Since then, a complete redesign called the PSP Go has been released, which was sold alongside the PSP-3000. In 2011 a budget model, the PSP-E1000, was released. The PSP line was succeeded by the PlayStation Vita, released in December 2011 in Japan, and in February 2012 in North America, Europe and Australia, respectively.

Sony first announced development of the PlayStation Portable at a press conference before E3 2003.Although mock-ups of the system were not present at the press conference or E3, Sony did release extensive technical details regarding the new system.[ Then-CEO of Sony Computer Entertainment Jose Villeta called the device the "Walkman of the 21st Century" in a reference to the console's multimedia capabilities. Several gaming websites were impressed by the handheld's computing capabilities and looked forward to the system's potential as a gaming platform.
The first concept images of the PSP appeared in November 2002 at the Sony Corporate Strategy Meeting and showed a PSP with flat buttons and no analog stick. Although some expressed concern over the lack of an analog joystick, these fears were allayed when the PSP was officially unveiled at the Sony press conference during E3 2004. In addition to announcing more details about the system and its accessories, Sony also released a list of 99 developer companies that had pledged support for the new handheld. Several PSP game demos, such as Konami's Metal Gear Acid and SCE Studio Liverpool's Wipeout Pure were also shown at the conference.
Share:
Newer Post Older Post