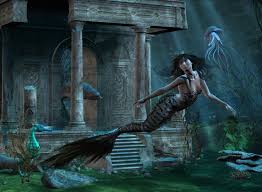 A mermaid is a legendary aquatic creature with the upper body of a female human and the tail of a fish.Mermaids appear in the folklore of many cultures worldwide, including the Near East, Europe, Africa and Asia. The first stories appeared in ancient Assyria, in which the goddess Atargatis transformed herself into a mermaid out of shame for accidentally killing her human lover. Mermaids are sometimes associated with perilous events such as floods, storms, shipwrecks and drownings. In other folk traditions (or sometimes within the same tradition), they can be benevolent or beneficent, bestowing boons or falling in love with humans.
Mermaids are associated with the mythological Greek sirens as well as with sirenia, a biological order comprising dugongs and manatees. Some of the historical sightings by sailors may have been misunderstood encounters with these aquatic mammals. Christopher Columbus reported seeing mermaids while exploring the Caribbean, and sightings have been reported in the 20th and 21st centuries in Canada, Israel and Zimbabwe. The U.S. National Ocean Service stated in 2012 that no evidence of mermaids has ever been found.
Mermaids have been a popular subject of art and literature in recent centuries, such as in Hans Christian Andersen's well-known fairy tale "The Little Mermaid" (1836). They have subsequently been depicted in operas, paintings, books, films and comics.

In 1493, sailing off the coast of Hispaniola, Columbus reported seeing three "female forms" which "rose high out of the sea, but were not as beautiful as they are represented". The logbook of Blackbeard, an English pirate, records that he instructed his crew on several voyages to steer away from charted waters which he called "enchanted" for fear of merfolk or mermaids, which Blackbeard himself and members of his crew reported seeing. These sighting were often recounted and shared by sailors and pirates who believed that mermaids brought bad luck and would bewitch them into giving up their gold and dragging them to the bottom of the sea. Two sightings were reported in Canada near Vancouver and Victoria, one from sometime between 1870 and 1890, the other from 1967.
During World War II in 1943, Japanese soldiers saw several mermaids on the shores of the Kei Islands. They reported seeing creatures swimming in the water — and one on a beach — with pink skin and spikes along their heads, estimated to be about 150 centimeters tall, with limbs and faces similar to that of a human but a mouth like a carp. The locals called them Orang Ikan, or "fish man" in Malay. Several of these sightings occurred and were reported to Sgt. Taro Horiba, who asked the locals about it and learned that they sometimes got caught in their fishing nets. The locals promised to send word to the sergeant the next time one was caught. One was eventually found dead on the shore, and he was allowed to examine it. This convinced him; he returned to Japan and tried to convince scientists to go and study them, but was never believed.
In August 2009, after dozens of people reported seeing a mermaid leaping out of the water and doing aerial tricks, the Israeli coastal town of Kiryat Yam offered a $1 million award for proof of its existence. In February 2012, work on two reservoirs near Gokwe and Mutare in Zimbabwe stopped when workers refused to continue, stating that mermaids had hounded them away from the sites. It was reported by Samuel Sipepa Nkomo, the water resources minister.
Share:
Newer Post Older Post