Intramuros The City Of Wall 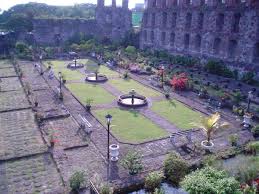 Intramuros is the oldest district and historic core of Manila, the capital of the Philippines. Known as the Walled City, the original fortified city of Manila was the seat of the Spanish government during the Spanish colonial period. The walled part of Manila was called intramuros, which is Latin for "within the walls"; districts beyond the walls were referred as the extramuros of Manila, meaning "outside the walls".
Construction of the defensive walls was started by the Spanish colonial government in the late 16th century to protect the city from foreign invasions. The 0.67-square-kilometre (0.26 sq mi) walled city was originally located along the shores of the Manila Bay, south of the entrance to Pasig River. Guarding the old city is Fort Santiago, its citadel located at the mouth of the river. Land reclamations during the early 20th-century subsequently obscured the walls and fort from the bay.
Intramuros was heavily damaged during the battle to recapture the city from the Japanese Imperial Army during the Second World War. Reconstruction of the walls was started in 1951 when Intramuros was declared a National Historical Monument, which is continued to this day by the Intramuros Administration (IA).
The Global Heritage Fund identified Intramuros as one of the 12 worldwide sites "on the verge" of irreparable loss and destruction on its 2010 report titled Saving Our Vanishing Heritage, citing its insufficient management and development pressures.

The strategic location of Manila along the bay and at the mouth of Pasig River made it an ideal location for the Tagalog and Kapampangan tribes and kingdoms to trade with merchants from China, India, Borneo and Indonesia.
Before the first arrival of Europeans on Luzon island, the island was part of the Majapahit empire around the 14th century, according to the epic eulogy poem Nagarakretagama which described its conquest by Mahārāja Hayam Wuruk. The region was invaded around 1485 by Sultan Bolkiah and became a part of the Sultanate of Brunei. The site of Intramuros then became a part of the Islamic Kingdom of Maynila ruled by various Datus, Rajas and the Sultan.