The Church Of Laoag Cathedral 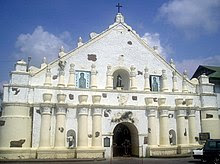 Laoag Cathedral, canonically known as St. William Cathedral is a church in Laoag City, Ilocos Norte, Philippines. It was built in 1612 by Augustinian friars to replace a wooden chapel. It is known for its Italian Renaissance design and its Sinking Bell Tower, which sinks into the ground at a rate of an inch a year.
St. William Cathedral serves as the seat or central church of the Roman Catholic Diocese of Laoag. Since Most Rev. Sergio Utleg's transfer to the Archdiocese of Tuguerarao, the diocese at present is vacant. The diocesan administrator is Very Rev. Fr. Noel Ian Rabago and the cathedral rector is Very Rev. Fr. Policarpio M. Albano.
The church has an unusual two-storey façade, supported by two pairs of columns on each side of the arched entrance. The top of the façade holds a recessed niche that showcases the image of the city's patron saint, San Guillermo (Saint William). It has windows made from capiz with wrought iron screens.
The cathedral was built to support a growing Christian population in Laoag, which was known as Ylaua at the time. The settlement was a mission detachment of Vigan during the Spanish era. The church was originally built using lime mixed with molasses for strength, with big stones, gravel and sand. Wood was used for trusses to support the roof, which originally was made of cogon grass and was later replaced with nipa. Much later the roofing was again changed to taleb, a corrugated galvanised iron sheet made with whole bamboo.
The church was damaged by hurricane in 1640, by earthquake in 1706, by fire in 1843. The church was restored in 1880.
Share:
Newer Post Older Post