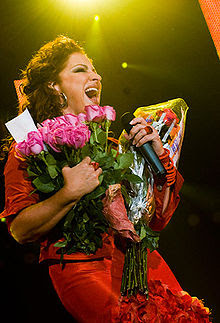 Gloria María Milagrosa Fajardo García de Estefan, known professionally as Gloria Estefan (born September 1, 1957) is a Cuban-born American singer, songwriter, actress and entrepreneur. She is in the top 100 best selling music artists with an estimated 100 million records sold worldwide, 31.5 million of those in the United States alone. She has won seven Grammy Awards and is the most successful crossover performer in Latin music to date.

Starting in 1977 the Miami Sound Machine began recording and releasing various albums and 45s on the Audiofon Records label in Miami. The first album from 1977 was entitled Live Again Renacer and was released with two different covers. After several more releases on the Audiofon label as well as the RCA Victor label and Miami Sound Machine's own label MSM Records, the band was signed to Discos CBS International and released several albums, 45s, and 12"s beginning with 1980s self-titled album Miami Sound Machine. Growing in popularity in both the United States and around the world, the group would continue recording and issuing various works for Discos CBS International through 1985. In 1984, Miami Sound Machine released their first Epic/Columbia album, Eyes of Innocence, which contained the dance hit "Dr. Beat" as well as the ballad "I Need Your Love". Their more successful follow-up album Primitive Love was released in 1985 launching three Top 10 hits on the Billboard Hot 100: "Conga" (U.S. #10), "Words Get In The Way" (U.S. #5), and "Bad Boy" (U.S. #8) became follow up hits in the U.S. and around the world. "Words Get in the Way" reached #1 on the US Hot Adult Contemporary Tracks chart, establishing that the group could perform pop ballads as successfully as dance tunes. The song "Hot Summer Nights" was also released that year and was part of the film Top Gun.
Their next album, 1987's Let It Loose, went multi-platinum, with three million copies sold in the US alone. It featured the following hits: "Anything for You" (#1 Hot 100), "1-2-3" (#3 Hot 100), "Betcha Say That" (#36 Hot 100), "Rhythm Is Gonna Get You" (#5 Hot 100), and "Can't Stay Away From You" (#6 Hot 100). "Can't Stay Away From You", "Anything for You" and "1-2-3" were all #1 Adult Contemporary hits as well.
In 1988, Estefan took top billing and the band's name changed to Gloria Estefan and Miami Sound Machine. Beginning in 1989, the group's name was dropped altogether. Estefan was credited as a solo artist, though the ever-changing line-up of Miami Sound Machine continues as her backing band to this day.
In 1988, after the worldwide chart success of single "Anything for You", her Let it Loose album was repackaged as Anything for You. It became the band's first UK #1 album, selling over a million copies. It was the biggest selling album of the year in The Netherlands, staying at #1 for 22 weeks.[citation needed] The album also took top honors in Australia and Canada, launching Estefan to superstar status.