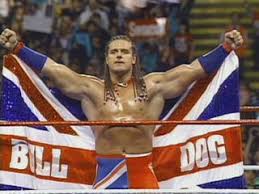 David "Davey" Boy Smith (27 November 1962 – 18 May 2002) was a British professional wrestler, also known as The British Bulldog, who was born in Golborne in North West England, United Kingdom. Smith is known for his appearances with Stampede Wrestling, the World Wrestling Federation (WWF) and World Championship Wrestling (WCW). Smith found success as both a singles and tag competitor, holding every major title in the WWF except the WWF Championship. Although never a world champion, he headlined multiple pay-per-view events in the WWF and WCW, in which he challenged for the WWF and WCW World Heavyweight Championships. Smith has the distinction of competing as WWF European Champion on the sole occasion where a match for that title headlined a pay-per-view event, at One Night Only in 1997. Kevin Powers of WWE (previously the WWF) wrote, "Davey Boy Smith is a certifiable legend in sports-entertainment...The fact is [he] should have been a world champion."
Smith was trained by Ted Betley in Winwick, England before relocating to Calgary, Alberta, Canada to further his training under Stu Hart. While training with Hart, Smith met Stu and Helen Hart's youngest daughter Diana, whom he married in 1984. They had two children, Harry (born on 2 August 1985) and Georgia (born on 26 September 1987). He and Diana were divorced in 2000.
Share:
Newer Post Older Post