History of Cultural Center of the Philippines 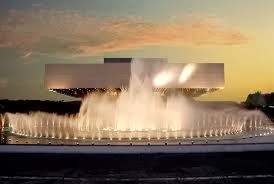 Before the turn of the 20th Century, artistic performances were primarily held in plazas and other public places around the country. In Manila, the Manila Grand Opera House, constructed in the mid-19th Century, served as the primary venue for many stage plays, operas and zarzuelas and other notable events of national significance. Conditions improve with the construction of the Metropolitan Theater in 1931 and smaller but adequately equipped auditoriums in institutions like Meralco, Philam Life, Insular Life, Ateneo de Manila University and Far Eastern University. In 1961, the Philippine-American Cultural Foundation started to raise funds for a new theater. The structure, designed by Leandro Locsin, was to be built on a 10-hectare (25 acres) lot in Quezon City. In the meantime in 1965, Imelda Marcos at a proclamation rally in Cebu for her husband's bid for the Presidency, expressed her desire to build a national theater. Marcos would win his election bid and work on the theater started with the issuance of Presidential Proclamation No. 20 on March 12, 1966. Imelda, now the First Lady, persuades the Philippine-American Cultural Foundation to relocate and expand plans for the still-born theater to a new reclaimed location along Roxas Boulevard in Manila. To formalize the project, President Marcos issues Executive Order No. 60, establishing the Cultural Center of the Philippines and appointing its board of directors. The board would elect Imelda as chairperson, giving her the legal mandate to negotiate and manage funds for the center.
The CCP provides performance and exhibition venues for various local and international productions at its eponymous 62-hectare (150 acres) complex located in the Cities of Pasay and Manila. Its artistic programs include the production of performances, festivals, exhibitions, cultural research, outreach, preservation, and publication of materials on Philippine art and culture. It holds its headquarters at the Tanghalang Pambansa (English: National Theatre), a structure designed by National Artist for Architecture, Leandro V. Locsin. Locsin would later design many of the other buildings in the CCP Complex.
Share:
Newer Post Older Post