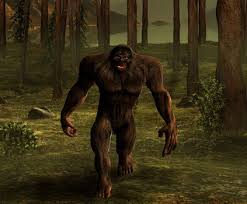 Bigfoot, also known as sasquatch, is the name given to an ape-like creature that some people believe inhabits forests, mainly in the Pacific Northwest region of North America. Bigfoot is usually described as a large, hairy, bipedal humanoid. The term sasquatch is an anglicized derivative of the Halkomelem word sásq’ets.
Most scientists discount the existence of Bigfoot and consider it to be a combination of folklore, misidentification, and hoax, rather than a living animal, because of the lack of physical evidence and the large numbers of creatures that would be necessary to maintain a breeding population. A few scientists, such as Jane Goodall, Grover Krantz, and Jeffrey Meldrum, have expressed interest and some measure of belief in the creature.

Various types of creatures have been suggested to explain both the sightings and what type of creature Bigfoot would be if it existed. The scientific community typically attributes sightings to either hoaxes or misidentification of known animals and their tracks. While cryptozoologists generally explain Bigfoot as an unknown ape, some believers in Bigfoot attribute the phenomenon to UFOs or other paranormal causes.

In 2007, the Pennsylvania Game Commission said that photos the Bigfoot Field Researchers Organization claimed showed a juvenile Bigfoot were probably of a bear with mange. Jeffrey Meldrum, on the other hand, said the limb proportions of the suspected juvenile in question were not bear-like, and stated that he felt they were "more like a chimpanzee."

Both scientists and Bigfoot believers agree that many of the sightings are hoaxes or misidentified animals.
Bigfoot sightings or footprints are often demonstrably hoaxes. Author Jerome Clark argues that the Jacko Affair, involving an 1884 newspaper report of an apelike creature captured in British Columbia, was a hoax. Citing research by John Green, who found that several contemporary British Columbia newspapers regarded the alleged capture as very dubious, Clark notes that the Mainland Guardian of New Westminster, British Columbia, wrote, "Absurdity is written on the face of it."
On July 14, 2005, Tom Biscardi, a long-time Bigfoot enthusiast and CEO of Searching for Bigfoot Inc., appeared on the Coast to Coast AM paranormal radio show and announced that he was "98% sure that his group will be able to capture a Bigfoot which they have been tracking in the Happy Camp, California area." A month later, Biscardi announced on the same radio show that he had access to a captured Bigfoot and was arranging a pay-per-view event for people to see it. Biscardi appeared on Coast to Coast AM again a few days later to announce that there was no captive Bigfoot. Biscardi blamed an unnamed woman for misleading him and the show's audience for being gullible.
On July 9, 2008, Rick Dyer and Matthew Whitton posted a video to YouTube claiming that they had discovered the body of a dead Sasquatch in a forest in northern Georgia. Tom Biscardi was contacted to investigate. Dyer and Whitton received $50,000 from Searching for Bigfoot, Inc., as a good faith gesture. The story of the men's claims was covered by many major news networks, including BBC, CNN, ABC News, and Fox News. Soon after a press conference, the alleged Bigfoot body arrived in a block of ice in a freezer with the Searching for Bigfoot team. When the contents were thawed, it was discovered that the hair was not real, the head was hollow, and the feet were rubber. Dyer and Whitton subsequently admitted it was a hoax after being confronted by Steve Kulls, executive director of Squatchdetective.com.
In August 2012, a man in Montana was killed by a car while perpetrating a Bigfoot hoax using a ghillie suit.
Share:
Newer Post Older Post