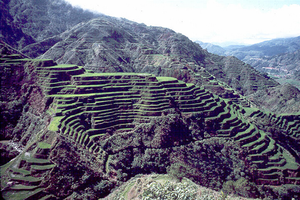 The Banaue Rice Terraces (Tagalog: Hagdan-hagdang Palayan ng Banawe) are 2,000-year old terraces that were carved into the mountains of Ifugao in the Philippines by ancestors of the indigenous people. The Rice Terraces are commonly referred to by Filipinos as the "Eighth Wonder of the World". It is commonly thought that the terraces were built with minimal equipment, largely by hand. The terraces are located approximately 1500 metres (5000 ft) above sea level and cover 10,360 square kilometres (about 6000 square miles) of mountainside. They are fed by an ancient irrigation system from the rainforests above the terraces. It is said that if the steps are put end to end it would encircle half the globe.
Locals to this day still plant rice and vegetables on the terraces, although more and more younger Ifugaos do not find farming appealing, often opting for the more lucrative hospitality industry generated by the Rice Terraces[citation needed]. The result is the gradual erosion of the characteristic "steps", which need constant reconstruction and care. In 2010 a further problem was drought, with the terraces drying up completely in March of that year.

The terraces are found in the province of Ifugao and the Ifugao people have been its caretakers. Ifugao culture revolves around rice and the culture displays an elaborate array of rice culture feasts linked with agricultural rites from rice cultivation to rice consumption. Harvest season generally calls for thanksgiving feasts while the concluding harvest rites tungo or tungul (the day of rest) entail a strict taboo of any agricultural work. Partaking of the bayah (rice beer), rice cakes, and betel nut constitutes an indelible practice during the festivities and ritual activities.
The Ifugao people practise traditional farming spending most of their labour at their terraces and forest lands while occasionally tending to root crop cultivation. The Ifugaos have also been known to culture edible shells, fruit trees, and other vegetables which has been exhibited among Ifugaos for generations. The building of the rice terraces, work of blanketing walls with stones and earth which is designed to draw water from a main irrigation canal above the terrace clusters. Indigenous rice terracing technologies have been identified with the Ifugao’s rice terraces such as their knowledge of water irrigation, stonework, earthwork and terrace maintenance. As their source of life and art, the rice terraces have sustained and shaped the lives of the community members. Ifugao previously belong to the Mountain Province as a municipality but on June 18, 1966 in effect of Republic Act No. 4695, Ifugao became an independent province.
Share:
Newer Post Older Post