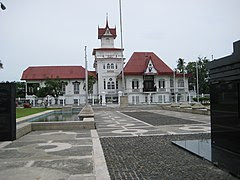 The Aguinaldo Shrine is the national shrine located in Kawit, Cavite in the Republic of the Philippines, where the independence of the Philippines from Spain was declared on June 12, 1898. To commemorate the event, now known as Araw ng Kalayaan or Independence Day, a national holiday, the Philippine flag is raised here by top government officials on June 12th each year. The house is now a museum.

The property which is adjacent to a river, was expanded to include Aguinaldo Park, a park in front of the house created for the Philippine Centennial celebration of 1998. The park with a long promenade and two long pools complemented the aesthetic beauty of the house which was previously fronted by a busy street. The park is highlighted by a bronze equestrian statue (on horseback) of Aguinaldo set on a marble pedestal.

Aguinaldo's house is a mansion over 14,000 square feet (1,300 m2) in floor area designed by Aguinaldo himself. The house, which features secret passages and hiding places for documents and weapons, showcases how the revolutionary zeal infused even the comfort of a Filipino home. The house is filled with fine antique furniture and decorated throughout with motifs of the Philippine flag and other national symbols.
The building is divided into three sections - the main house on the west side of the building, the family wing on the east, and the tower located in between. The middle section is a five-story tower with a spire at the very top. The mezzanine level on the second floor is sometimes counted as an extra floor. The ground floor of the house was previously unwalled which is typical of the houses during the era. Today, it houses a museum of Aguinaldo's memorabilia and other historical artifacts. A hologram depicting Aguinaldo during the eve of June 12, 1898 is one of the exhibit.
Located on the second floor is the grand hall, a large meeting room where from its historic front window, the Declaration of Independence was read. The front Independence balcony was added by Aguinaldo during the 1919 renovations. The dining room located on the same floor is highlighted by a relief map of the Philippines on its ceiling. Also on this level is the bedroom of Aguinaldo, the kitchen, a conference room, and a partially covered terrace on the western end of the building. On the east wing are three bedrooms for the general's three daughter's. A covered balcony (azotea) at the end of the wing was christened by Aguinaldo as Galeria de los Pecadores (Hall of the Sinners) as military plots against the Spanish authorities were planned there.
The next level is a mezzanine library which overlooks the grand hall below. A plight of stairs takes the visitor to the Ambassador Room used as a study by the general's son-in-law, Ambassador Jose Melencio. The next floor is the other bedroom of Aguinaldo which he used during the latter part of his life. A tiled terrace on this level gives a commanding view of the town to as far as Manila. A very narrow ladder takes one to the top of the tower which is allegedly the favorite spot of Aguinaldo.
Share:
Newer Post Older Post