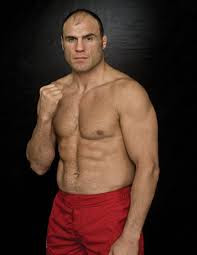 Randy Duane Couture  born June 22, 1963) is an American actor, retired mixed martial artist, collegiate and Greco-Roman wrestler. During his tenures in the Ultimate Fighting Championship (UFC), Couture became a three-time UFC Heavyweight Champion, two-time UFC Light Heavyweight Champion, an Interim UFC Light Heavyweight Champion, and was the UFC 13 Heavyweight Tournament Winner. Couture is the first fighter to hold two UFC championship titles in two different divisions (heavyweight and light heavyweight). Couture has competed in a record 15 title fights. He holds the most title reigns in the UFC with five. His last fight with Lyoto Machida marked his 24th fight in the UFC, the third largest number of fights in the UFC (Tito Ortiz is first with 27 and Matt Hughes is second with 25). Couture is the fourth member of the UFC Hall of Fame. He is the only person over the age of 40 to have won a UFC championship fight, having done so four times.
Couture was an Olympic wrestling alternate and has lived in Corvallis, Oregon, throughout much of his career, where he served as an assistant wrestling coach and a strength and conditioning coach for Oregon State University. He established Team Quest with Matt Lindland and Dan Henderson, a training camp for fighters, based out of Gresham, Oregon, and headed by coach Robert Folis. In 2005, Couture moved to Las Vegas, where he opened his own extensive chain of gyms under the name Xtreme Couture. He currently trains at his Las Vegas-based gym. Couture partnered with Bas Rutten in the opening of Legends Gym in Hollywood, California.
Couture is generally recognized as a clinch and ground-and-pound fighter who uses his wrestling ability to execute take downs, establish top position and successively strike the opponent on the bottom. Couture has displayed a variety of skills in boxing and catch wrestling and has submitted four opponents using different chokeholds. Couture is the only athlete in UFC history to win a championship after becoming a Hall of Fame member and is the oldest title holder ever (in the UFC and MMA).
Share:
Newer Post Older Post