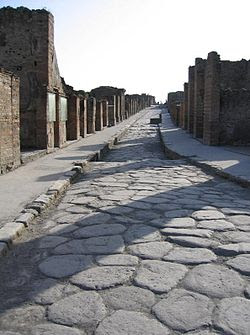 The city of Pompeii was an ancient Roman town-city near modern Naples in the Italian region of Campania, in the territory of the comune of Pompei. Pompeii, along with Herculaneum and many villas in the surrounding area, was mostly destroyed and buried under 4 to 6 m (13 to 20 ft) of ash and pumice in the eruption of Mount Vesuvius in 79 AD.
Researchers believe that the town was founded in the seventh or sixth century BC and was captured by the Romans in 80 BC. By the time of its destruction, 160 years later, its population was probably approximately 20,000, with a complex water system, an amphitheatre, gymnasium and a port.
The eruption was cataclysmic for the town. Evidence for the destruction originally came from a surviving letter by Pliny the Younger, who saw the eruption from a distance and described the death of his uncle Pliny the Elder, an admiral of the Roman fleet, who tried to rescue citizens. The site was lost for about 1500 years until its initial rediscovery in 1599 and broader rediscovery almost 150 years later by Spanish engineer Rocque Joaquin de Alcubierre in 1748. The objects that lay beneath the city have been well preserved for thousands of years because of the lack of air and moisture. These artifacts provide an extraordinarily detailed insight into the life of a city during the Pax Romana. During the excavation, plaster was used to fill in the voids between the ash layers that once held human bodies. This allowed one to see the exact position the person was in when he or she died.
Pompeii has been a tourist destination for over 250 years. Today it has UNESCO World Heritage Site status and is one of the most popular tourist attractions of Italy, with approximately 2.5 million visitors every year.

The archaeological digs at the site extend to the street level of the 79 AD volcanic event; deeper digs in older parts of Pompeii and core samples of nearby drillings have exposed layers of jumbled sediment that suggest that the city had suffered from other seismic events before the eruption. Three sheets of sediment have been found on top of the lava that lies below the city and, mixed in with the sediment, archaeologists have found bits of animal bone, pottery shards and plants. Carbon dating has determined the oldest of these layers to be from the 8th–6th centuries BC (around the time the city was founded). The other two strata are separated either by well-developed soil layers or Roman pavement, and were laid in the 4th century BC and 2nd century BC. It is theorized that the layers of the jumbled sediment were created by large landslides, perhaps triggered by extended rainfall.
The town was founded around the 7th–6th century BC by the Osci or Oscans, a people of central Italy, on what was an important crossroad between Cumae, Nola and Stabiae. It had already been used as a safe port by Greek and Phoenician sailors. According to Strabo, Pompeii was also captured by the Etruscans, and in fact recent[timeframe?] excavations have shown the presence of Etruscan inscriptions and a 6th-century BC necropolis. Pompeii was captured for the first time by the Greek colony of Cumae, allied with Syracuse, between 525 and 474 BC.
In the 5th century BC, the Samnites conquered it (and all the other towns of Campania); the new rulers imposed their architecture and enlarged the town. After the Samnite Wars (4th century BC), Pompeii was forced to accept the status of socium of Rome, maintaining, however, linguistic and administrative autonomy. In the 4th century BC, it was fortified. Pompeii remained faithful to Rome during the Second Punic War.
Pompeii took part in the war that the towns of Campania initiated against Rome, but in 89 BC it was besieged by Sulla. Although the blunts of the Social League, headed by Lucius Cluentius, helped in resisting the Romans, in 80 BC Pompeii was forced to surrender after the conquest of Nola, culminating in many of Sulla's veterans being given land and property, while many of those who went against Rome were ousted from their homes. It became a Roman colony with the name of Colonia Cornelia Veneria Pompeianorum. The town became an important passage for goods that arrived by sea and had to be sent toward Rome or Southern Italy along the nearby Appian Way.
It was fed with water by a spur from Aqua Augusta (Naples) built c. 20 BC by Agrippa; the main line supplied several other large towns, and finally the naval base at Misenum. The castellum in Pompeii is well preserved, and includes many details of the distribution network and its controls.
Share:
Newer Post Older Post