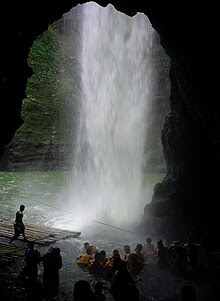 Pagsanjan Falls (indigenous name: Magdapio Falls) is one of the most famous waterfalls in the Philippines. Located in the province of Laguna, the falls is one of the major tourist attractions of the region. The three-drop waterfall is reached by a river trip on dugout canoe, known locally as Shooting the rapids, originating from the municipality of Pagsanjan. The falls can also be reached from the top by a short hike from Cavinti. The boat ride has been an attraction since the Spanish Colonial Era with the oldest written account in 1894. The town of Pagsanjan lies at the confluence of two rivers, the Balanac River and the Bumbungan River (also known as the Pagsanjan River).

According to history, the Pagsanjan Falls is rich in legendary lore. Long, long ago, recounts one legend, there were no falls. There were only the foliaged highlands, the twin rivers called Bumbungan and Balanac, and the alluvial delta where the town of Pagsanjan now nestles. On the eastern bank of the Bumbungan River lived two old brothers named Balubad and Magdapio. For many years, the two brothers enjoyed a rustic life of peace and happiness. But one day calamity struck. A terrible drought brought ruin and death; no rains came for successive months. The soil became dry as tinder. The blooming flowers and food plants withered and died. The birds, deer, wild hogs, monkeys, and other animals disappeared. The rivers, creeks, and mineral springs dried up. Not a single drop of life-giving rain fell from heaven.

Balubad and Magdapio suffered immensely. Day and night, they prayed for rain, but the gods did not heed their prayers. The older and weaker of the two brothers, Balubad, died of thirst. Magdapio, with a sorrowing heart, buried him on the slope of the mountain overlooking the river delta. This mountain is now called Balubad.
Left alone in a waterless world, Magdapio agonizingly trekked to the upper region of the arid riverbed. He reached the high rocky cliffs, after an arduous journey. But to his utter disappointment, he found no water.
"Ye gods!" he sobbed bitterly, "Where is the water?" In despair, he angrily hurled down his big cane among the rocks.
Suddenly, a spring bubbled on the spot where the cane fell. Rapidly it grew bigger. The fresh waters roared down the canyon walls, soon becoming a booming waterfall. Amazed at the miracle, Magdapio fell on his knees and thanked the gods. He drank the cool water until he felt new energy surging in his blood. Thus emerged the falls of Pagsanjan.
Share:
Newer Post Older Post