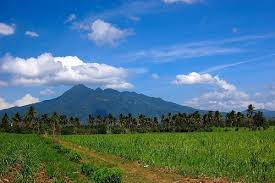 Mount Makiling, also rarely Mount Maquiling, is a potentially active volcano in Laguna province on the island of Luzon, Philippines. It rises to 1,090 m above mean sea level.

Mount Makiling is a forest reservation whose care is designated to the University of the Philippines, Los Baños. The following are the proclamations, republic acts, and executive orders relevant to the Makiling Forest Reserve (MFR):
Proclamation No. 106 (1910) - Makiling Forest Reserve was established with specific boundaries and placed under the Bureau of Forestry by Governor General W. Cameron Forbes to regulate the use of public forest and forest reserves in the Philippines; Makiling Forest Reserve was set aside for the purpose of establishing a forest school and for silvicultural studies.
Proclamation No. 60 (1920) - The reserved was renamed Makiling National Botanic Gardens and placed under the Bureau of Forestry by Proclamation NO. 60 issued by Governor General Francis B. Harrison primary for scientific studies on plants and animals.
Proclamation No. 552 (1933) - The reserved was renamed the Makiling National Park under the Bureau of Forestry issued by Governor General Theodore Roosevelt to serve as game refuge and for other purposes for the benefit and enjoyment of the people.
Proclamation No. 214 (1937) - Calamba Estate block was added to the Park for forest purposes issued by President Manuel L. Quezon.
Republic Act (RA) 826 (1952) - Transfer of the administration of the Makiling National Park form the Bureau of Forestry to the Commission of Parks and Wildlife in order to promote effectual planning, development, maintenance and conservation of all national parks, monuments and wildlife in the country.
Proclamation No. 692 (1960) - Administration of the Makiling National Park was transferred from the Commission of Parks and Wildlife to the University of the Philippines (UP) issued by President Carlos P. Garcia for forestry education and research purposes of the College of Forestry, subject to the condition that said land will be conserved and preserved as a national park.
[2]
Republic Act (RA) 3523 (1963) - The Makiling National park was disestablished and then ceded, transferred and conveyed to UP issued by Pres. Diosdado Macapagal to serve as the land resource for carrying out a program of public education and information in forestry, with end goal of promoting general public appreciation of forest values.
Executive Order (EO) 224 (1987) - Complete jurisdiction, control and regulation of watershed areas including the Makiling Forest Reserve was given to the National Power Corporation (NPC) issued by President Corazon C. Aquino in support of the country’s major program of energy development.

Republic Act (RA) 6967 (1990) - Administration of the Makiling Forest Reserve was finally transferred to UPLB by President Corazon C. Aquino primarily as a training laboratory for the advancement of scientific and technical knowledge on the preservation, conservation and development of forest, flora and fauna and natural resources.
Executive Order 121 (1994) - created a Presidential Commission on Laguna Lake and Mt. Makiling Development to address urgent problems affecting the resources and to formulate a master plan for the development of the lake and the reserve which are seen as integrated ecosystems.
Share:
Newer Post Older Post