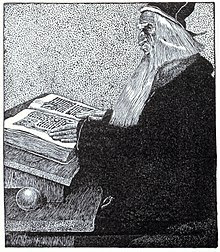 Merlin is a legendary figure best known as the wizard featured in the Arthurian legend. The standard depiction of the character first appears in Geoffrey of Monmouth's Historia Regum Britanniae, written c. 1136, and is based on an amalgamation of previous historical and legendary figures. Geoffrey combined existing stories of Myrddin Wyllt (Merlinus Caledonensis), a North Brythonic prophet and madman with no connection to King Arthur, with tales of the Romano-British war leader Ambrosius Aurelianus to form the composite figure he called Merlin Ambrosius (Welsh: Myrddin Emrys).
Geoffrey's rendering of the character was immediately popular, especially in Wales. Later writers expanded the account to produce a fuller image of the wizard. Merlin's traditional biography casts him as a cambion: born of a mortal woman, sired by an incubus, the non-human wellspring from whom he inherits his supernatural powers and abilities. The name of Merlin's mother is not usually stated but is given as Adhan in the oldest version of the Prose Brut. Merlin matures to an ascendant sagehood and engineers the birth of Arthur through magic and intrigue. Later authors have Merlin serve as the king's advisor until he is bewitched and imprisoned by the Lady of the Lake.


Later adaptations of the legend