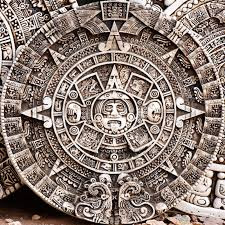 The Maya calendar is a system of calendars used in pre-Columbian Mesoamerica, and in many modern communities in highland Guatemala and in Veracruz, Oaxaca and Chiapas, Mexico.
The essentials of the Maya calendar are based upon a system which had been in common use throughout the region, dating back to at least the 5th century BCE. It shares many aspects with calendars employed by other earlier Mesoamerican civilizations, such as the Zapotec and Olmec, and contemporary or later ones such as the Mixtec and Aztec calendars. Although the Mesoamerican calendar did not originate with the Maya, their subsequent extensions and refinements of it were the most sophisticated.[citation needed] Along with those of the Aztecs, the Maya calendars are the best-documented and most completely understood.[citation needed]
By the Maya mythological tradition, as documented in Colonial Yucatec accounts and reconstructed from Late Classic and Postclassic inscriptions, the deity Itzamna is frequently credited with bringing the knowledge of the calendar system to the ancestral Maya, along with writing in general and other foundational aspects of Maya culture.

With the development of the place-notational Long Count calendar (believed to have been inherited from other Mesoamerican cultures), the Maya had an elegant system with which events could be recorded in a linear relationship to one another, and also with respect to the calendar ("linear time") itself. In theory, this system could readily be extended to delineate any length of time desired, by simply adding to the number of higher-order place markers used (and thereby generating an ever-increasing sequence of day-multiples, each day in the sequence uniquely identified by its Long Count number). In practice, most Maya Long Count inscriptions confine themselves to noting only the first five coefficients in this system (a b'ak'tun-count), since this was more than adequate to express any historical or current date (20 b'ak'tuns cover 7,885 solar years). Even so, example inscriptions exist which noted or implied lengthier sequences, indicating that the Maya well understood a linear (past-present-future) conception of time.
However, and in common with other Mesoamerican societies, the repetition of the various calendric cycles, the natural cycles of observable phenomena, and the recurrence and renewal of death-rebirth imagery in their mythological traditions were important influences upon Maya societies. This conceptual view, in which the "cyclical nature" of time is highlighted, was a pre-eminent one, and many rituals were concerned with the completion and re-occurrences of various cycles. As the particular calendric configurations were once again repeated, so too were the "supernatural" influences with which they were associated. Thus it was held that particular calendar configurations had a specific "character" to them, which would influence events on days exhibiting that configuration. Divinations could then be made from the auguries associated with a certain configuration, since events taking place on some future date would be subject to the same influences as its corresponding previous cycle dates. Events and ceremonies would be timed to coincide with auspicious dates, and avoid inauspicious ones.
The completion of significant calendar cycles ("period endings"), such as a k'atun-cycle, were often marked by the erection and dedication of specific monuments (mostly stela inscriptions, but sometimes twin-pyramid complexes such as those in Tikal and Yaxha), commemorating the completion, accompanied by dedicatory ceremonies.
A cyclical interpretation is also noted in Maya creation accounts, in which the present world and the humans in it were preceded by other worlds (one to five others, depending on the tradition) which were fashioned in various forms by the gods, but subsequently destroyed. The present world also had a tenuous existence, requiring the supplication and offerings of periodic sacrifice to maintain the balance of continuing existence. Similar themes are found in the creation accounts of other Mesoamerican societies
Share:
Newer Post Older Post