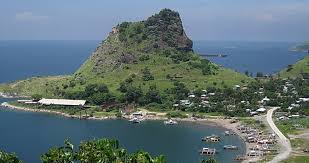 Mariveles is a first class municipality in the province of Bataan, Philippines. According to the 2010 census, it has a population of 112,707 people.
Mariveles is located in a cove at the southern tip of the Bataan Peninsula. It is about 173 kilometres (107 mi) from Manila via the North Luzon Expressway, Gapan-Olongapo Road and Roman Highway. It has a total land area of 153.9 square kilometres (59.4 sq mi), representing 12% of the total land area of Bataan. Of this, about 69% consist of the pastureland, 19% of forestland, 6% agricultural lands and the remaining 6% for residential and industrial use. It is home to an Aeta community speaking a Sambalic language called Mariveleño.

“Maraming Dilis” shortened to Mara-dilis and into “Mariveles” was the origin of the town's name. Also, Maria Veles, a nun left the convent to love a man until her death. That man named her grave as Mt. Maria Veles (shortened to Mariveles).
Founded as a pueblo by a Franciscan Friar in 1578, Mariveles, the "Village of Kamaya" was part of the Corregimiento, including Bagac and Morong, Corregidor and Maragondon, Cavite.
The Superior Decree of July 1754 declared Mariveles' independence from Pampanga.
In the 19th century, the Americans established the first quarantine station in the old Spanish Leprosarium Hospital (now, the National Mental Ward).

Pursuant to the Local government in the Philippines", the political seat of the municipal government is located at the Municipal Town Hall. In the History of the Philippines (1521–1898), the Gobernadorcillo is the Chief Executive who holds office in the Presidencia. During the American rule (1898–1946) (History of the Philippines (1898-1946)), the elected Mayor and local officials, including the appointed ones hold office at the Municipal Town Hall. The legislative and executive departments perform their functions in the Sangguniang Bayan (Session Hall) and Municipal Trial Court, respectively, and are located in the second floor of the Town Hall and in the adjacent building.
Mariveles, Bataan's incumbent elected officials are - Mayor Jesse I. Concepcion and Vice Mayor Hon. Victoriano C. Isip.
The Sangguniang Bayan Members are: Councilors - Hon. Lopez Sineneng, Hon. Angele San Pedro, Hon. Edgardo P. Calumbas, Hon. Jocelyn P. Catonado, Hon. Jeff B. Rizal, Hon. Joseph T. Pereyra, Hon. Joel V. Ibarra, Hon. Amante S. Versoza, Hon. Arvin V. Zurita, SB Member / Municipal ABC President and Hon. Kevin O. Ricafrente, SB Member / MSKF President.
They hold office at the second floor of the Mariveles Municipal Hall, National Road, Poblacion, Mariveles, Bataan, Philippines 2105, particularly the Office of the Mayor and Sangguniang Bayan Session Hall, respectively.