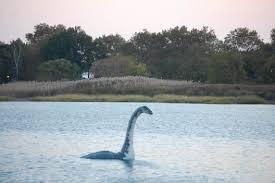 The Loch Ness Monster is a cryptid, reputedly a large unknown animal that inhabits Loch Ness in the Scottish Highlands. It is similar to other supposed lake monsters in Scotland and elsewhere, though its description varies from one account to the next. Popular interest and belief in the animal's existence has varied since it was first brought to the world's attention in 1933. Evidence of its existence is anecdotal, with minimal and much-disputed photographic material and sonar readings.
The most common speculation among believers is that the creature represents a line of long-surviving plesiosaurs. The scientific community regards the Loch Ness Monster as a modern-day myth, and explains sightings as including misidentifications of more mundane objects, outright hoaxes, and wishful thinking. Despite this, it remains one of the most famous examples of cryptozoology. The legendary monster has been affectionately referred to by the nickname Nessie (Scottish Gaelic: Niseag) since the 1940s.

The earliest report of a monster associated with the vicinity of Loch Ness appears in the Life of St. Columba by Adomnán, written in the 7th century. According to Adomnán, writing about a century after the events he described, the Irish monk Saint Columba was staying in the land of the Picts with his companions when he came across the locals burying a man by the River Ness. They explained that the man had been swimming the river when he was attacked by a "water beast" that had mauled him and dragged him under. They tried to rescue him in a boat, but were able only to drag up his corpse. Hearing this, Columba stunned the Picts by sending his follower Luigne moccu Min to swim across the river. The beast came after him, but Columba made the sign of the Cross and commanded: "Go no further. Do not touch the man. Go back at once." The beast immediately halted as if it had been "pulled back with ropes" and fled in terror, and both Columba's men and the pagan Picts praised God for the miracle.
The oldest manuscript relating to this story was put online in 2012. Believers in the Loch Ness Monster often point to this story, which takes place on the River Ness rather than the loch itself, as evidence for the creature's existence as early as the 6th century. However, sceptics question the narrative's reliability, noting that water-beast stories were extremely common in medieval saints' Lives; as such, Adomnán's tale is likely to be a recycling of a common motif attached to a local landmark. According to the sceptics, Adomnán's story may be independent of the modern Loch Ness Monster legend entirely, only becoming attached to it in retrospect by believers seeking to bolster their claims. In an article for Cryptozoology, A. C. Thomas notes that even if there were some truth to the story, it could be explained rationally as an encounter with a walrus or similar creature that had swum up the river. R. Binns acknowledges that this account is the most serious of various alleged early sightings of the monster, but argues that all other claims of monster sightings prior to 1933 are highly dubious and do not prove that there was a tradition of the monster before this date.
Share:
Newer Post Older Post