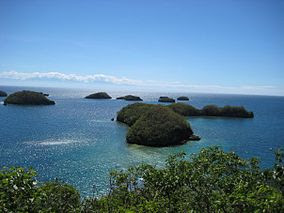 The Hundred Islands National Park (Pangasinan: Kapulo-puloan or Taytay-Bakes) is a national park in the Republic of the Philippines. The protected area is located in the city of Alaminos, in the province of Pangasinan in northern Philippines. The islands, totaling 124 at low tide and 123 at high tide, are scattered in Lingayen Gulf covering an area of 16.76 square kilometres (6.47 sq mi). Only three of them have been developed for tourism: Governor Island, Quezon Island, and Children's Island. The Lucap wharf in Alaminos, the entrance to the National Park, is about 240 kilometres (150 mi) north of Manila, the capital of the Philippines.

The national park was created by Presidential Proclamation No. 667, covering an area of 16.76 square kilometres (6.47 sq mi) and signed by President Manuel L. Quezon on January 18, 1940, for the benefit and enjoyment of the people of the Philippines and known as the Hundred Islands National Park (HINP). The Republic Act No. 3655 signed on June 22, 1962, created the Hundred Islands Conservation and Development Authority (HICDA), for the conservation, development and management of HINP. The park including Lucap Bay was transferred from HICDA to the Philippine Tourism Authority (PTA) by virtue of Section 35 of Presidential Decree No. 564.
On April 27, 1982 under Proclamation No. 2183, the national park including Lucap Bay and its foreshore areas, beginning from Sitio Telbang to the east to Sitio Recudo to the west, were declared as a Tourist Zone and Marine Reserve under the control and administration of the PTA. Subsequently under the Presidential Proclamation No. 2237 enacted on November 06, 1982, the parcels of land reserve for the Marine Fisheries Multi-Purpose Farm (created under Proclamation No. 1282 of June 21, 1974) were withdrawn and were also placed under the control and supervision of the Tourism Authority for development purposes.
The Executive Order No. 436 signed by President Gloria Macapagal-Arroyo on June 21, 2005 transferred the administration, management, maintenance and operation of the whole Hundred Islands National Park (HINP), including all the activities, facilities and improvements thereafter, from the Philippine Tourism Authority (PTA) to the city government of Alaminos, Pangasinan in pursuit of Republic Act No. 7160, otherwise known as the Local Government Code of 1991, which encouraged the transfer of power and authority from the national government to local government units, in line with the government’s devolution program mandated by the Constitution.
Share:
Newer Post Older Post