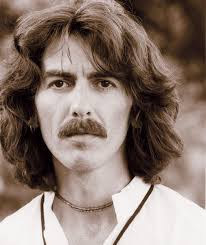 George Harrison,[nb 1] MBE (25 February 1943 – 29 November 2001) was an English musician, singer and songwriter who achieved international fame as the lead guitarist of the Beatles. John Lennon and Paul McCartney were the band's primary songwriters, but most of their albums included at least one Harrison composition, including "While My Guitar Gently Weeps", "Here Comes the Sun" and "Something", the Beatles' second most-covered song.
Harrison's earliest musical influences included Big Bill Broonzy, George Formby and Django Reinhardt; Chet Atkins, Chuck Berry and Ry Cooder were significant later influences. By 1965 he had begun to lead the Beatles into folk rock through his interest in the Byrds and Bob Dylan, and towards Indian classical music through his use of the sitar on "Norwegian Wood (This Bird Has Flown)". He developed an interest in the Hare Krishna movement and became an admirer of Indian culture and mysticism, introducing them to the other members of the Beatles and their Western audience by incorporating Indian instrumentation in their music. After the band's break-up in 1970, Harrison released the triple album All Things Must Pass, from which two hit singles originated. He also organized the 1971 Concert for Bangladesh with Ravi Shankar, a precursor for later benefit concerts such as Live Aid. Harrison was a music and film producer as well as a musician; he founded Dark Horse Records in 1974 and co-founded HandMade Films in 1978.
Harrison released several best-selling singles and albums as a solo performer, and in 1988 co-founded the platinum-selling supergroup the Traveling Wilburys. A prolific recording artist, he was featured as a guest guitarist on tracks by Badfinger, Ronnie Wood and Billy Preston, and collaborated on songs and music with Bob Dylan, Eric Clapton and Tom Petty, among others. Rolling Stone magazine ranked him number 11 in their list of the "100 Greatest Guitarists of All Time".
Harrison's first marriage, to Pattie Boyd, ended in divorce in 1977. The following year he married Olivia Trinidad Arias, with whom he had one son, Dhani. Harrison died in 2001, aged 58, from lung cancer. He was cremated and his ashes were scattered in the Ganges and Yamuna rivers in India, in a private ceremony according to Hindu tradition. He left almost £100 million in his will.

Before the Beatles' break-up Harrison had already recorded and released two solo albums: Wonderwall Music and Electronic Sound, both of which include mainly instrumental compositions. Wonderwall Music, a soundtrack to the 1968 film Wonderwall, blends Indian and Western instrumentation, while Electronic Sound is an experimental album that prominently features a Moog synthesizer. Released in November 1968, Wonderwall Music was the first solo album by a Beatle and the first LP released by Apple Records. Indian musicians Aashish Khan and Shivkumar Sharma performed on the album, which contains the experimental sound collage "Dream Scene", recorded several months before Lennon's "Revolution 9".
In December 1969 Harrison participated in a brief tour of Europe with the American group Delaney & Bonnie and Friends. During the tour that included Clapton, Bobby Whitlock, drummer Jim Gordon and band leaders Delaney and Bonnie Bramlett, Harrison began to write "My Sweet Lord", which became his first single as a solo artist. Delaney Bramlett inspired Harrison to learn slide guitar, significantly influencing his later music.
Share:
Newer Post Older Post