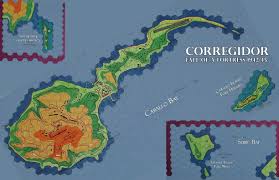 Corregidor Island, locally called Isla ng Corregidor, is a lofty island located at the entrance of Manila Bay in southwestern part of Luzon Island in the Philippines. Due to this location, Corregidor was fortified with several coastal artillery and ammunition magazines to defend the entrance of Manila Bay and the City of Manila from attacks by enemy warships in the event of war. Located 48 kilometres (30 mi) inland, Manila has been the largest city and the most important seaport in the Philippines for centuries, from the colonial rule of Spain, the United States, and Japan and after the establishment of the Republic of the Philippines in 1946.
Corregidor (Fort Mills) is the largest of the islands that formed the harbor defenses of Manila Bay together with El Fraile Island (Fort Drum), Caballo Island (Fort Hughes) and Carabao Island (Fort Frank), which were all fortified during the American occupation of the country. The island was also the site of a small military airfield, as part of the defense.
During World War II, Corregidor played an important role during the invasion and liberation of the Philippines from Japanese forces. Heavily bombarded in the latter part of the war, the ruins left on the island serve as a military memorial to American, Filipino and Japanese soldiers who served or lost their lives on the island. Corregidor is one of the important historic and tourist sites in the country. 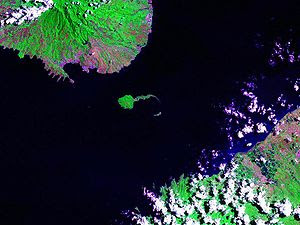 Corregidor Island and the entrance to Manila Bay.
Corregidor and the other fortified islands of Manila Bay fall under the jurisdiction of the City of Cavite, Cavite province.[ Corregidor, also known as "The Rock" for its rocky landscape and the heavy fortifications, along with Caballo Island, about 1.7 km (1.1 mi) south, divide the entrance of Manila Bay into the North and South Channel.
The tadpole-shaped island, with its tail running eastward, is about 6.5 km (4.0 mi) long, about 2.0 km (1.2 mi) wide at its widest with a total land area of about 900 hectares (2,200 acres). The highest elevation is at 589 ft (180 m) on the Topside. The island is divided into four sections:

The island's biggest area, which points towards the South China Sea, rises prominently to a large flat area that is called the "Topside". Beneath this was the fortified communications center of the island, as well as the location for the Army headquarters, barracks for enlisted men, a branch of the Philippine Trust Co. bank, the Cine Corregidor movie theater, officers' quarters, underground ordnance shops, the traditional parade grounds, an Officers' Club with a 9-hole Golf Course, tennis courts, and swimming pool, and the bulk of the batteries that constituted the strength of Corregidor.

Middleside is a small plateau that interrupts the upward slope from Bottomside to Topside, and was the location of 2-story officers' quarters, barracks for the enlisted men, a hospital, quarters for non-commissioned officers, a service club, PX, and two schoolhouses—one for the children of Filipino soldiers and the other for American children.

Bottomside in 1982
Bottomside is the lower part of the island and is the neck that connects the tail and head of the island. South of Bottomside was Barangay or Barrio San José (near what was Navy Beach); on the north is what was Army Dock, with its three large piers, and, east of Bottomside, is the Malinta Tunnel. The Malinta Hill separates Bottomside from the Tail End.

The Tailside or Tail End is not a given name, but it is the remaining portion of the island where different memorials, shrines and the island's airstrip are located. Kindley Field was constructed in the early 1920s and named in honor of an early hero of the U.S. Army Air Corps. The airfield was operated then by the army, and the navy had a hydroplane base. The short runway, cramped and hilly terrain had limited its use.

Corregidor and Caballo islands are remnants of a volcanic crater, the Corregidor Caldera, which was last active about one million years ago. However, the Philippine Institute of Volcanology and Seismology (PHIVOLCS) still classifies Corregidor as a potentially active volcano.

The island came under Spanish sovereignty since May 19, 1570 when Miguel Lopez de Legazpi and his forces arrived in Manila Bay. Legazpi was authorized by the Spanish Crown to establish the capital of the Philippines in Manila, and convert the Muslims from Luzon and Mindanao to Christianity. Corregidor was used as a support site for the nine Spanish galleys used during the campaign.
Under the Spanish rule, Corregidor served not only as a fortress of defense, a penal institution, and a station for Customs inspection, but also as a signal outpost to warn Manila of the approach of hostile ships. Corregidor comes from the Spanish word corregir, meaning "to correct." One story states that the island was called Isla del Corregidor (literally, Island of the Corrector) due to the Spanish customs system, wherein all ships entering Manila Bay were required to stop and have their documents checked and "corrected". Another version claims that the island was used a penitentiary or correctional institution by the Spanish government, and thus came to be called El Corregidor. Corregidor is also a specific position of authority within the former Spanish administrative structure. He is the head of the territorial unit known as Corregimiento. The institution of administrative districts called Corregimientos (with the chief, "El Corregidor") was in use throughout Spanish America and the Philippines. Just as an example, in the Philippines had "corregidores" in charge of Bataan and Zambales, among others. "Isla del Corregidor", the ancient name of the place, literally means "Corregidor's island".
On November 23, 1574, the Chinese pirate Limahong and his 65 vessel fleet, with 3,000 men anchored between Corregidor and Mariveles. From that site he launched two successive attacks against Manila, commanded either by Limahong himself or the Japanese Sioco. Both of them failed their purpose before a fierce battle defense led by the governor Juan de Salcedo.
In November and December 1600, the surroundings of Corregidor Island were used as berth by the Dutchman Olivier van Noort. His sailboats Mauritius and Hendracht were engaged in pirate activities on the sailing route to and from Manila. This situation was overcome after the naval combat of Fortune Island on December 14, 1600. As a result, Spain lost its ship San Diego but captured the Dutch sailing boat Hendracht and Oliver van Noort retired from the Philippines.
As a consequence of these events, and also to prevent a sneak attack by the Muslims from Mindanao, a watch vessel was settled in Corregidor to control the entrance to the bay. According to data from 1637, this vessel had a crew of twenty men, who were paid 540 pesos a year to perform this vigilance task.
Corregidor Island was taken over by the Dutch in June 1647 and from there they launched an offensive against Cavite which was repelled by the Spanish garrison, under command of Andre Lopez de Azalduigui. However, the Dutchmen would remain in the island for seven more months as it served them well as an operations base to intercept Chinese merchant traffic in the vicinity of Luzon and Cebu. Finally they withdrew with little of their expectations fulfilled.
During the British attack and its following invasion of Manila and Cavite in October 1762 by the Royal Navy and the British Army troops of Admiral Cornish and General Draper, Corregidor was used as an anchorage for warships, particularly the HMS Panther and the captured warship, the Spanish galleon Santisima Trinidad, during November 1762.
The arrival of the Spanish fleet, led by General Ignacio Mario de Alava, with the mission to place the Philippine Islands on alert, did not affect the luck of Corregidor Island. He limited his activity to the setting up of a naval station at Cavite.
On January 18, 1853, the Corregidor Island Lighthouse was first lit on the highest part of the island to mark the entrance of Manila Bay to vessels coming in from the South China Sea. The Spanish government built the Second-Order light, which is situated 639 feet (195 m) above sea level and visible for 20 miles (32 km).

Corregidor Island was included in the Philippines defense plan presented in 1885 by General Cerero, but no action was taken. When the U.S. Navy's attack was thought to be imminent, a 12 cm gun, the "Hontoria System", which came from the Spanish Navy's cruiser Antonio de Ulloa and two shorter ones of the same caliber, from the Spanish warship Lezo, were installed on the rocky island El Fraile. On the south side of Corregidor, the Spanish army installed three 18 cm artillery pieces which came from the Spanish navy cruiser Velasco which was undergoing reparation works.
On the midnight of April 30 to the 1st of May 1898, U.S. Navy Commodore George Dewey led his naval squadron, with his flag hoisted on board the armored cruiser USS Olympia, eastward along the southern coast of Corregidor Island, beyond the reach of Spanish batteries and with no navigational lights on.
At a distance about one mile off El Fraile, Dewey's fleet changed course to the North East, steaming towards Manila. When they were discovered, the Spaniards fired from El Fraile's artillery. American response followed immediately, first by the McCulloc and then by the Boston, Raleigh and Concord. Since the fleet speed was ten knots, they were soon far away from the Spanish batteries. Dewey sailed for Cavite where he destroyed the naval forces of Admiral Monojo.
Once the Cavite shipyard was subdued by means of a Stipulated Pact, two American ships went ashore at Corregidor Island on the 3rd of May forcing the Spaniards on the island to surrender. Colonel Garces, chief of the coast batteries at the entrance of Manila's Bay, and the island's governor, First Class Naval Lieutenant, Augusto Miranda, were urged to come to terms with the Americans, and so they did. Therefore, Miranda remained on the island with only 100 soldiers and the Spanish Flag on top; Garces and officers under his command, as well as 292 men with their weapons and ammunition, were transferred to the Mariveles port. From there they were conducted along the provinces of Bataan and Pampanga until they reached Manila on the 5th of May. There they joined the Navy battalion which was already quartered in Sampaloc.
On the 4th of May, the American ships opened fire against the 100 men who, according to the pact had been left on Corregidor and demanded the garrison forces be reduced to 25 men. The Spanish governor consulted Manila authorities, and they ordered the evacuation of the island. The troops were sent to Naic, Cavite on boats while the governor was transferred to the American cruiser USS Baltimore and became a prisoner with his family. The Americans offered to liberate him but the Navy Lieutenant rejected. Shortly afterwards, he was disembarked in Balanga, Bataan. In this way, the Spanish presence on Corregidor Island, which had lasted 328 years, came to an end.
Share:
Newer Post Older Post