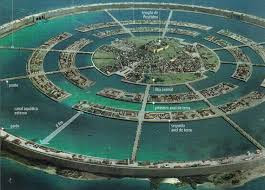 Atlantis (Ancient Greek: Ἀτλαντὶς νῆσος, "island of Atlas") is a legendary island first mentioned in Plato's dialogues Timaeus and Critias, written in c. 360 BC. According to Plato, Atlantis was a naval power lying "across the Pillars of Hercules" that conquered many parts of Western Europe and Africa 9,000 years before the time of the legendary Athenian lawgiver Solon, i.e. in the 10th millennium BC. After a failed attempt to invade Athens, Atlantis sank into the ocean "in a single day and night of misfortune."
The possible existence of Atlantis was discussed throughout classical antiquity, but it was usually rejected and occasionally parodied by later authors. Cameron states: "It is only in modern times that people have taken the Atlantis story seriously; no one did so in antiquity". The Timaeus remained known in a Latin rendition by Calcidius through the Middle Ages, and the allegorical aspect of Atlantis was taken up by Humanists in utopian works of several Renaissance writers, such as Bacon's New Atlantis and More's Utopia. In the United States, Donnelly's 1882 publication Atlantis: the Antediluvian World unleashed widespread interests from pseudo-scientists. As a theme, Atlantis inspires today's light fiction, from science fiction to comic books to films. Its name has become a byword for any and all supposed advanced prehistoric lost civilizations.
In academia, the Atlantis story is seen as one of the many myths Plato incorporated into his work for stylistic reasons, in this case to represent his conceptualized ideal state (see The Republic) in action. Like the story of Gyges, it might have been inspired by older traditions or mythology. The frame story in Critias tells about an alleged visit of Solon to Egypt, where a priest of Sais translated the story of the purported war of ancient Athens and Atlantis into Greek. Although most classicists reject this way of tradition as implausible, some scholars argue that Egyptian records of the Thera eruption, the Sea Peoples invasion, or the Trojan War might have indeed influenced Plato in some way. Most modern classicists and philologists, however, insist that Plato designed the story from scratch, and was loosely inspired by contemporary events like the failed Athenian invasion of Sicily in 415–413 BC, or the destruction of Helike in 373 BC.

Some ancient writers viewed Atlantis as fiction while others believed it was real. The philosopher Crantor, a student of Plato's student Xenocrates, is often cited as an example of a writer who thought the story to be historical fact. His work, a commentary on Plato's Timaeus, is lost, but Proclus, a Neoplatonist of the 5th century AD, reports on it. The passage in question has been represented in the modern literature either as claiming that Crantor actually visited Egypt, had conversations with priests, and saw hieroglyphs confirming the story or as claiming that he learned about them from other visitors to Egypt. Proclus wrote:

As for the whole of this account of the Atlanteans, some say that it is unadorned history, such as Crantor, the first commentator on Plato. Crantor also says that Plato's contemporaries used to criticize him jokingly for not being the inventor of his Republic but copying the institutions of the Egyptians. Plato took these critics seriously enough to assign to the Egyptians this story about the Athenians and Atlanteans, so as to make them say that the Athenians really once lived according to that system.

The next sentence is often translated "Crantor adds, that this is testified by the prophets of the Egyptians, who assert that these particulars [which are narrated by Plato] are written on pillars which are still preserved." But in the original, the sentence starts not with the name Crantor but with the ambiguous He, and whether this referred to Crantor or to Plato is the subject of considerable debate. Proponents of both Atlantis as a myth and Atlantis as history have argued that the word refers to Crantor.
Alan Cameron argues that it should be interpreted as referring to Plato, and that when Proclus writes that "we must bear in mind concerning this whole feat of the Athenians, that it is neither a mere myth nor unadorned history, although some take it as history and others as myth", he is treating "Crantor's view as mere personal opinion, nothing more; in fact he first quotes and then dismisses it as representing one of the two unacceptable extremes".
Cameron also points out that whether he refers to Plato or to Crantor, the statement does not support conclusions such as Otto Muck's "Crantor came to Sais and saw there in the temple of Neith the column, completely covered with hieroglyphs, on which the history of Atlantis was recorded. Scholars translated it for him, and he testified that their account fully agreed with Plato's account of Atlantis" or J. V. Luce's suggestion that Crantor sent "a special enquiry to Egypt" and that he may simply be referring to Plato's own claims.
Another passage from Proclus' commentary on the Timaeus gives a description of the geography of Atlantis:


That an island of such nature and size once existed is evident from what is said by certain authors who investigated the things around the outer sea. For according to them, there were seven islands in that sea in their time, sacred to Persephone, and also three others of enormous size, one of which was sacred to Hades, another to Ammon, and another one between them to Poseidon, the extent of which was a thousand stadia [200 km]; and the inhabitants of it—they add—preserved the remembrance from their ancestors of the immeasurably large island of Atlantis which had really existed there and which for many ages had reigned over all islands in the Atlantic sea and which itself had like-wise been sacred to Poseidon. Now these things Marcellus has written in his Aethiopica".


Marcellus remains unidentified.
Other ancient historians and philosophers believing in the existence of Atlantis were Strabo and Posidonius.

Plato's account of Atlantis may have also inspired parodic imitation: writing only a few decades after the Timaeus and Critias, the historian Theopompus of Chios wrote of a land beyond the ocean known as Meropis. This description was included in Book 8 of his voluminous Philippica, which contains a dialogue between King Midas and Silenus, a companion of Dionysus. Silenus describes the Meropids, a race of men who grow to twice normal size, and inhabit two cities on the island of Meropis (Cos?): Eusebes (Εὐσεβής, "Pious-town") and Machimos (Μάχιμος, "Fighting-town"). He also reports that an army of ten million soldiers crossed the ocean to conquer Hyperborea, but abandoned this proposal when they realized that the Hyperboreans were the luckiest people on earth. Heinz-Günther Nesselrath has argued that these and other details of Silenus' story are meant as imitation and exaggeration of the Atlantis story, for the purpose of exposing Plato's ideas to ridicule.
Zoticus, a Neoplatonist philosopher of the 3rd century AD, wrote an epic poem based on Plato's account of Atlantis.
The 4th-century historian Ammianus Marcellinus, relying on a lost work by Timagenes, a historian writing in the 1st century BC, writes that the Druids of Gaul said that part of the inhabitants of Gaul had migrated there from distant islands. Some have understood Ammianus's testimony as a claim that at the time of Atlantis's actual sinking into the sea, its inhabitants fled to western Europe; but Ammianus in fact says that "the Drasidae (Druids) recall that a part of the population is indigenous but others also migrated in from islands and lands beyond the Rhine" (Res Gestae 15.9), an indication that the immigrants came to Gaul from the north (Britain, the Netherlands or Germany), not from a theorized location in the Atlantic Ocean to the south-west. Instead, the Celts that dwelled along the ocean were reported to venerate twin gods (Dioscori) that appeared to them coming from that ocean.
Share:
Newer Post Older Post