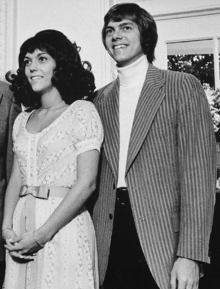 The Carpenters were an American vocal and instrumental duo, consisting of siblings Karen and Richard Carpenter. Though often referred to by the public as The Carpenters, the duo's official name on authorized recordings and press materials is simply "Carpenters".[1] During a period in the 1970s when louder and wilder rock was in great demand, Richard and Karen produced a distinctively soft musical style that made them among the best-selling music artists of all time.[2]Carpenters' melodic pop produced a record-breaking run of hit recordings on the American Top 40 and Adult Contemporary charts, and they became leading sellers in the soft rock, easy listening and adult contemporary genres. Carpenters had three No. 1 singles and five No. 2 singles on the Billboard Hot 100 and fifteen No. 1 hits on the Adult Contemporary chart (see The Carpenters discography). In addition, they had twelve top 10 singles (including their No. 1 hits). To date, Carpenters' album and
single sales total more than 100 million units.[3

During their 14-year career, the Carpenters recorded 11 albums, thirty-one singles, five television specials, and a short-lived television series. They toured in the United States, the United Kingdom, Japan, Australia, the Netherlands and Belgium. Their recording career ended with Karen's death in 1983 from cardiac arrest following complications of anorexia nervosa. Extensive news coverage of the circumstances surrounding her death increased public awareness of the consequences of eating disorders.[4][5]

One of the elements that made the music of the Carpenters distinctive was Karen's use of her low register. Though present in jazz and country music, there were few contralto singers in popular music at the time. However, Karen had a wide vocal range that spanned about three octaves.[6] As a result of a decided lack of enthusiasm all around for Karen's "head voice", they mostly concentrated on her lower range, i.e. "chest voice" (or her "basement", as Karen called it).[6] "Both Karen and I felt the magic was in her 'chest voice' (a.k.a. 'basement'). There is no comparison in terms of richness in sound, so I wasn't about to highlight the upper voice", states Richard in the "Fans Ask" section of the Carpenters' official website.[6]
Because Karen's magic was in the "basement", Richard always rearranged cover songs and his own songs in a key that would suit her. Many of the Carpenters' songs are in the keys of D ("You", "There's a Kind of Hush"), E flat ("Only Yesterday"), E ("Hurting Each Other", "Yesterday Once More"), F ("I'll Never Fall in Love Again"), and G ("And When He Smiles", "Reason to Believe", "For All We Know", "You'll Love Me").[7]
Although he played many keyboard instruments during the band's existence, including grand piano, harpsichord, Hammond organ and synthesizer, Richard is best known as an endorser of Wurlitzer's electric pianos, whose sound he described as "warm" and "beautiful". He would often double his acoustic piano parts with a Wurlitzer in the studio to thicken the sound. From the mid-1970s Richard also used Fender Rhodes pianos, often having an acoustic grand as well as both Rhodes and Wurlitzer electric pianos on stage for different songs.
Apart from being a singer, Karen was also an accomplished drummer, and often played the drums on their pre-1974 songs. According to Richard, she considered herself a "drummer who sang".[8] Karen was rarely visible behind the drums during live performances. Although unwilling, she and Richard eventually reached a performance compromise: during the ballads she would sing standing and through the lesser known songs she would sit. As the years progressed, demand for Karen's vocals began to overshadow her drumming time, and gradually she played the drums less. By the A Kind of Hush album in 1976, Karen did not play the drums at all.[9]
Most of the Carpenters' arrangements (which, with few exceptions, were done by Richard) are classical in style, with many strings, and sometimes brass and woodwinds ("Calling Occupants of Interplanetary Craft" used over 160 singers and musicians[10]). Music critic Daniel Levitin called Richard Carpenter "one of the most gifted arrangers to emerge in popular music."[11]