The Rosetta Stone is a fragment of a stela, a free-standing stone inscribed with Egyptian governmental or religious records.
It’s made of black basalt and weighs about three-quarters of a ton (0.680 metric tons).
The stone is 118 cm (46.5 in.) high, 77 cm. (30 in.) wide and 30 cm. (12 in.) deep — roughly the size of a medium-screen LCD television or a heavy coffee table
But what’s inscribed on the Rosetta Stone is far more significant than its composition. It features three columns of inscriptions, each relaying the same message but in three different languages:
Greek, hieroglyphics and Demotic. Scholars used the Greek and Demotic inscriptions to make sense of the hieroglyphic alphabet.
By using the Rosetta Stone as a translation device, scholars revealed more than1,400 years of ancient Egyptian secrets 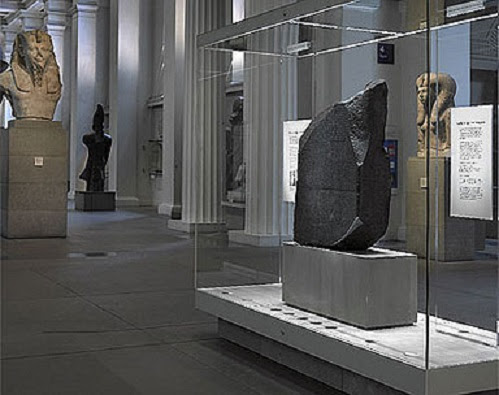 Museum Image Gallery: Rosetta Stone on display in British Museum
The discovery and translation of the Rosetta Stone are as fascinating as the translations that resulted from the stone.
Controversial from the start, it was unearthed as a result of warfare and Europe’s quest for world domination.
. Its translation continued to cause strife between nations, and even today, scholars debate who should be credited with the triumph of solving the hieroglyphic code.
Even the stone’s current location is a matter of debate. This artifact has long held a powerful grip over history and politics.
Since 1802, the Rosetta Stone has occupied a space in London’s British Museum.