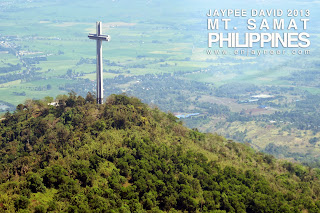 Mount Samat is a mountain in the Town of Pilar, Province of Bataan, Republic of the Philippines that is the site of the Dambana ng Kagitingan or "Shrine of Valor".
Along with the island fortress of Corregidor, Mount Samat was the site of the most vicious battle against the Japanese Imperial Army in 1942 during the Battle of Bataan.
The mountain is now a war memorial. A huge white cross stands as a mute but eloquent reminder of the men who died there. It also acts as a tourist attraction with a war museum nearby that has a wide array of displays from paintings of the Philippine heroes to armaments used by the American, Filipino and Japanese forces during the heat of the battle.
Mount Samat is a parasitic cone of Mount Mariveles with no record of historical eruption. The summit of Mount Samat is 9.2 km (5.7 mi) NNE of the Mariveles caldera.[2] Mount Samat itself has a 550-metre (1,800 ft) wide crater that opens to the northeast. The Mount Samat Cross is situated near the edge of the crater rim.[1] burat

At the start of World War II in 1942 after suffering heavy losses against the Imperial Japanese Army all over Luzon, the Filipino and American soldiers retreated to Bataan Peninsula to regroup for a last valiant but futile stand. After four months of fighting, the 78,000 exhausted, sick and starving soldiers under Major General Edward P. King surrendered to the Japanese on April 9, 1942 known as the fall of Bataan. It is the single largest surrender of U.S. soldiers in history and Mariveles, a town in the Bataan province, was their last stronghold after which, together with the Philippine soldiers, they were led on to the 80-mile (130 km) march to Capas, Tarlac known as the Bataan Death March.
The Mount Samat National Shrine shrine was erected as a fitting memorial to the heroic struggle and sacrifices of those soldiers who fought and died in that historic bastion of freedom.[3]
Share:
Newer Post Older Post