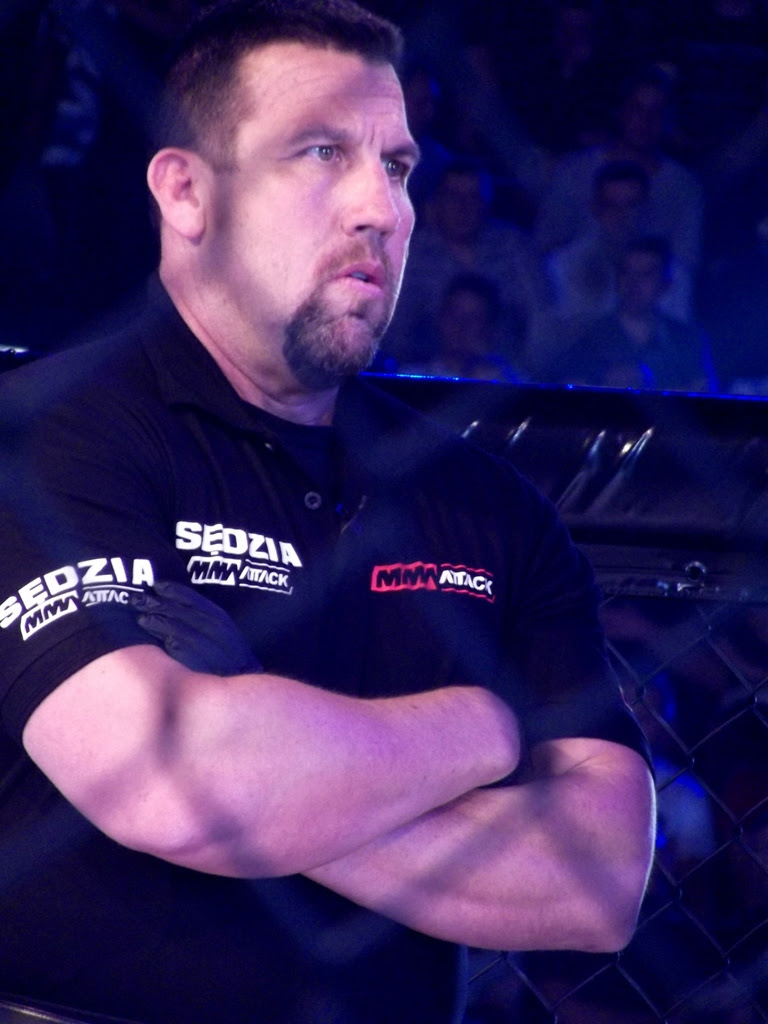 John Michael McCarthy, (born October 12, 1962 in Los Angeles, CA) the 'Octagon's ninth side', is the first head referee for the Ultimate Fighting Championship, a retired Los Angeles Police Officer, and a Tactical Self-Defense Instructor at the Los Angeles Police Academy.

He formerly provided commentary and analysis for The Fight Network's coverage of UFC events. He also provided commentary for Affliction: Banned, the first MMA event co-produced by Affliction Clothing and Adrenaline MMA. He has served as head referee for hundreds of bouts in major MMA promotions dating back to 1993.[1] He is also the founder of C.O.M.M.A.N.D., the training and certification school for MMA referees and judges.

The nickname of 'Big John' came about because of his stature. He stands 6'4" and weighs 270 lb; making him larger than the majority of the athletes over whom he presides. According to a UFC interview, the nickname was given to him by UFC co-founder and promoter Art Davie. McCarthy recalls that the nickname began when he forcibly lifted Davie off the ground and held him in the air. John McCarthy is of Irish descent.

McCarthy was the most senior referee in the UFC and is well known for his delivery of "Let's Get It On!", a catchphrase created by boxing referee Mills Lane. McCarthy served as one of the head referees for nearly every fight in the UFC from UFC 2 until UFC 77, and was considered as much a part of the UFC as the octagonal arena itself. His 535th bout was the main event at The Ultimate Fighter: Team Hughes vs. Team Serra finale in Las Vegas, Roger Huerta vs. Clay Guida.

McCarthy briefly retired after this bout to pursue a career as a commentator for The Fight Network but returned to officiating just a year later. Since his return, McCarthy has refereed for promotions all over the globe including the UFC and Strikeforce.

His connection to the UFC was attributed to his relationship with the Gracie family, particularly Rorion Gracie. McCarthy had been training Brazilian Jiu Jitsu under Rorion at the Gracie Academy in Torrance, CA in the early 1990s, and was designated a certified "GRAPLE" (Gracie Resisting Attack Procedures for Law Enforcement) instructor by the Gracie Academy in December 1993.

When Rorion Gracie was putting together his new fighting promotion in 1993, McCarthy expressed interest in fighting for the UFC, but Gracie advised against it; however, due to his experience in law enforcement, McCarthy was seen as a fitting man to referee. He debuted at UFC 2: No Way Out in 1994.

The early days of UFC did not contain many rules; McCarthy's role was only to supervise the fight and to ensure that it ended promptly when a competitor either submitted (also known as tap out), was knocked out, or had his towel thrown in. Although first disfavored by UFC executives, after UFC 2 McCarthy insisted on referee stoppages when a fighter cannot intelligently defend himself.

On December 31, 2004, McCarthy served as the referee for a fight held on the K-1 Dynamite! card at the Osaka Dome in Osaka, Japan between MMA legend Royce Gracie and Sumo legend-turned-fighter Akebono Taro.

In September 2006, John McCarthy opened his first MMA school in Valencia, CA. This 29,000-square-foot (2,700 m2) gym is one of the largest MMA schools in California. His dozen or so instructors teach Brazilian Jiu Jitsu, kickboxing, boxing, wrestling, judo, and MMA. In January 2007, he was awarded his Brazilian Jiu-Jitsu black belt. Currently, McCarthy lives in

Los Angeles with his wife Elaine and their three children: Ronald II (named after his grandfather), Britney and John Michael Junior (AKA "Little John").

In early 2008, McCarthy started a referee and judging course for MMA officials called COMMAND (Certification of Officials for Mixed Martial Arts National Development).
On September 1, 2011, McCarthy's autobiography titled "Let's Get It On - The Making of MMA and its Ultimate Referee" was released.

McCarthy appeared with retired MMA fighter Bas Rutten in New Found Glory's video "Listen To Your Friends", where he refs MMA fights between the band members. The music video, which was shot on November 5, 2008 in Los Angeles, California, premiered on March 9, 2009. He has also appeared on Fight Science "super cops" on national geographic.

McCarthy also appeared in the TV series "Friends", season 3 episode 24 "The One with the Ultimate Fighting Champion" where he plays the referee of a UFC match between Tank Abbott and Jon Favreau.
McCarthy also serves as the referee on the MTV2 series Bully Beatdown, along with professional mixed martial artist Jason "Mayhem" Miller.[2]
Share:
Newer Post Older Post