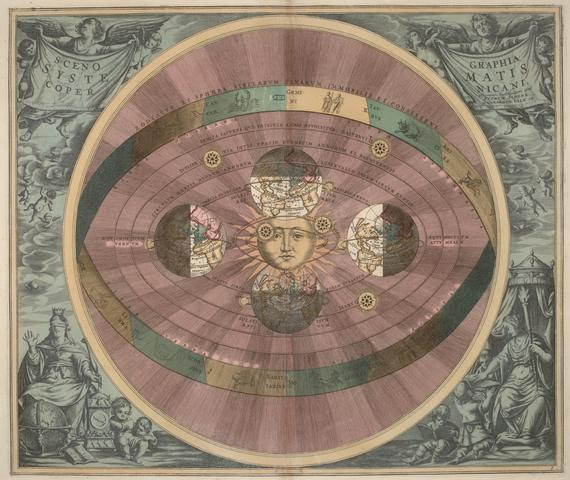 Heliocentrism, or heliocentricism, is the astronomical model in which the Earth and planets revolve around a relatively stationary Sun at the center of the Solar System. The word comes from the Greek (ἥλιος helios "sun" and κέντρον kentron "center"). Historically, heliocentrism was opposed to geocentrism, which placed the Earth at the center. The notion that the Earth revolves around the Sun had been proposed as early as the 3rd century BC by Aristarchus of Samos, but Aristarchus's heliocentrism attracted little attention until Copernicus revived and elaborated it. Lucio Russo, however, argues that this is a misleading impression resulting from the loss of scientific works of the Hellenistic Era. Using indirect evidence he argues that a heliocentric view was expounded in Hipparchus's work on gravity
It was not until the 16th century that a fully predictive mathematical model of a heliocentric system was presented, by the Renaissance mathematician, astronomer, and Catholic cleric Nicolaus Copernicus of Poland, leading to the Copernican Revolution. In the following century, Johannes Kepler elaborated upon and expanded this model to include elliptical orbits, and supporting observations made using a telescope were presented by Galileo Galilei.
To anyone who stands and looks up at the sky, it seems that the Earth stays in one place, while everything in the sky rises in the east and sets in the west once a day. With more scrutiny, however, one will observe more complicated movements. The positions at which the Sun and moon rise change over the course of a year, some planets and stars do not appear at all for many months, and planets sometimes appear to have moved in the reverse direction for a while, relative to the background stars.
As these motions became better understood, more elaborate descriptions were required, the most famous of which was the geocentric Ptolemaic system, which achieved its full expression in the 2nd century. The Ptolemaic system was a sophisticated astronomical system that managed to calculate the positions for the planets to a fair degree of accuracy. Ptolemy himself, in his Almagest, points out that any model for describing the motions of the planets is merely a mathematical device, and since there is no actual way to know which is true, the simplest model that gets the right numbers should be used.However, he rejected the idea of a spinning earth as absurd as he believed it would create huge winds. His planetary hypotheses were sufficiently real that the distances of moon, sun, planets and stars could be determined by treating orbits' celestial spheres as contiguous realities. This made the stars' distance less than 20 Astronomical Units, a regression, since Aristarchus of Samos's heliocentric scheme had centuries earlier necessarily placed the stars at least two orders of magnitude more distant.
Share:
Newer Post Older Post