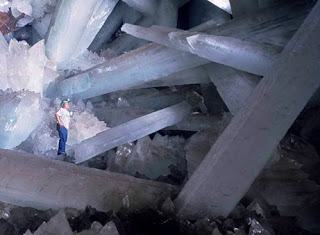 Buried a thousand feet (300 meters) below Naica mountain in the Chihuahuan Desert, the cave was discovered by two miners excavating a new tunnel for the Industrias Peñoles company in 2000.
The cave contains some of the largest natural crystals ever found: translucent gypsum beams measuring up to 36 feet (11 meters) long and weighing up to 55 tons.
"It's a natural marvel," said García-Ruiz, of the University of Granada in Spain.
To learn how the crystals grew to such gigantic sizes, García-Ruiz studied tiny pockets of fluid trapped inside.

The crystals, he said, thrived because they were submerged in mineral-rich water with a very narrow, stable temperature range—around 136 degrees Fahrenheit (58 degrees Celsius).
At this temperature the mineral anhydrite, which was abundant in the water, dissolved into gypsum, a soft mineral that can take the form of the crystals in the Naica cave.
The new findings appear in the April issue of the journal Geology.