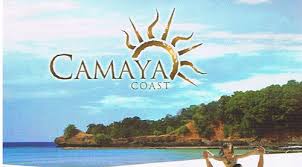 The Camaya Coast is a beach resort with a residential development in the municipality of Mariveles in Bataan province, Philippines. The 450-hectare community includes commercial and residential developments, which includes six subdivisions.
The area currently holds a restaurant, an infinity swimming pool, an event hall, and a boutique hotel. The hotel was built with the exterior resembling the architecture of Miami, Florida, while the interior has an Asian contemporary look.
Representative Albert S. Garcia from the 2nd District of Bataan stated that the Camaya Coast had huge tourist potential, as it was already bringing significant tourism to Bataan in general, and he was optimistic about its future. The mayor of Mariveles, Jesse I. Concepcion, said that the Camaya Coast is far more accessible than other attractions in the region, as it is only two hours by land from Metro Manila, and only an hour by ferry boat from Roxas Boulevard. The chairman of the Freeport Area of Bataan (FAB), Deogracias G.P. Custodio, commented that Camaya Coast as an integral part of the work-life balance lifestyle at the FAB and favors the contrast the resort gives to the industrial and business sectors that make up the FAB region.
Share:
Newer Post Older Post