The Excelence Of Execution Bret " The Hitman" Hart 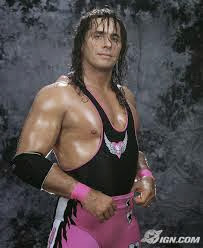 “I’m The Best There Is, Best There Was, and the Best There Ever Will Be!”
Bret “The Hitman” Hart is one of those wrestlers that you can love or hate, but you absolutely have to respect the man. While actions in his personal life are controversial, and his outspoken,
sometimes malicious nature have turned fans off, the reality of it is that Bret Hart is one of the true, great wrestlers.

Bret Hart began his career in Stampede wrestling. An amateur wrestling in high school, it was inevitable that Bret would become a professional wrestler, due to the legacy set by the infamous “Hart Family”. Bret would learn his trade in Stampede wrestling battling against a wide variety of talented wrestlers to improve his skills, including the Dynamite Kid and Tiger Mask.

Bret joined the World Wrestling Federation in 1984, where he would remain for 13 whole years. Brets WWF career began with him tag-teaming with Jim Neidhart as the “Hart Foundation”. It would take almost three years but the Hart Foundation would go on to win the tag team titles, defeating the British Bulldogs in this match:
Bret was one of the only wrestlers to successfully juggle both a singles and tag team career at the same time, wrestling the likes of Ricky “The Dragon” Steamboat and the Macho Man Randy Savage.

It took until the early 1990s for Brets single career to really take off however, and it took off with a bang with Bret Hart winning the Intercontinental Title at Summerslam 91 beating Mr. Perfect. I remember this match fondly, because at that point I thought it was “impossible” for anyone to break out of the perfect-plex yet Bret did it, and managed to win the IC Title in the process.

In later years The Rock would refer to himself as the “Peoples Champion” but in reality Bret Hart was the true peoples champion. One of his trademark moves was to give his sunglasses to a kid at ringside when he came to the ring, and he also received the most fan mail out of all the wrestlers, even when he wasn’t in the main events.

Brets success would continue as he won the 1991 King of the Ring. His first real feud since becoming the intercontinental champion was an epic feud with The Mountie, losing the title in the process. He’d regain the title at Wrestlemania 9 against Roddy Piper, in a fantastic and very passionate match that had you glued to your set the entire time:

At Summerslam 1992, Bret would drop the title to Davey Boy Smith. This match was great at the time, however is one of those matches that only grow in stature when we later learned that Davey Boy Smith gassed literally 3 minutes into the match, yet Bret Hart managed to carry him to a 30 minute ***** match, which is generally accepted as the greatest Summerslam match ever:

Bret would soon after that win his first WWF Championship, beating Ric Flair and would go onto successfully defend the title against the likes of Shawn Michaels, Razor Ramon and Ric Flair. Unfortunately he would lose the title to Yokozuna at Wrestlemania 9 and then bid farewell to the main event, as Hulk Hogan was back to take that over:

This would result in being a good thing however, as Bret Hart won the 1993 King of the Ring, then entered into a long feud with Jerry Lawler that would continue for years. The hatred between the two was evident and Jerry Lawler played the “weasel” role to perfection.

Bret would return to the title scene at Wrestlemania 10, losing his chance at regaining the title due to the “mistake” of Owen Hart. This disagreement between the two would grow throughout the year, with Owen getting more and more frustrated at Bret every turn. It all came to an intense climax at the 1994 Royal Rumble when in the tag team championship match between The Harts and The Quebecers, the match was stopped with Bret being declared too injured to continue. Owen would attack his knee, the heel turn complete.

Hart would go on to “win” the Royal Rumble with Lex Luger in the infamous finish:

Bret would regain the WWF Championship at Wrestlemania 10, while losing to Owen on the same show. The two would feud for a long time with Bret also feuding with Diesel, yet all the interest was in the Bret-Owen feud which would cost Bret his WWF Title against Bob Backlund at Survivor Series 1994.

In 1995-1996 Bret would participate in various feuds, fighting against the likes of Bob Backland, and many or Jerry Lawlers allies like Isaac Yankem DDS. He would also win his third WWF championship against Diesel at Survivor Series, and would have an epic iron man match against Shawn Michaels at Wrestlemania 12, losing in overtime.
Share:
Newer Post Older Post