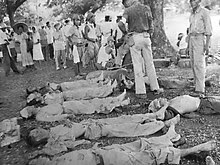 The Bataan Death March (Tagalog: Martsa ng Kamatayan sa Bataan, Japanese: Batān Shi no Kōshin (バターン死の行進?)) ja:バターン死の行進, which began on April 9, 1942, was the forcible transfer by the Imperial Japanese Army of 60-80,000 Filipino and American prisoners of war after the three-month Battle of Bataan in the Philippines during World War II.[3][4] All told, approximately 2,500–10,000 Filipino and 100-650 American prisoners of war died before they could reach their destination at Camp O'Donnell.[5][6] The reported death tolls vary, especially amongst Filipino POWs, because historians cannot determine how many prisoners blended in with the civilian population and escaped. The march went from Mariveles, Bataan, to San Fernando, Pampanga. From San Fernando, survivors were loaded to a box train and they were brought to Camp O'Donell in Capas, Tarlac.
The 128 km (80 mi) march was characterized by wide-ranging physical abuse and murder, and resulted in very high fatalities inflicted upon prisoners and civilians alike by the Japanese Army, and was later judged by an Allied military commission to be a Japanese war crime.[4]


The March of Death

Dead soldiers on the Bataan Death March.
The Japanese were unprepared for the number of prisoners that they were responsible for, and there was no organized plan for how to handle them. Prisoners were stripped of their weapons and valuables, and told to march to Balanga, the capital of Bataan. Many were beaten, bayoneted, and mistreated. The first major atrocity occurred when between 350 and 400 Filipino officers and NCOs were summarily executed after they had surrendered.[7]
The Japanese failed to supply the prisoners with food or water until they had reached Balanga. Many of the prisoners died along the way of heat or exhaustion.[5] Prisoners were given no food for the first three days, and were only allowed to drink water from filthy water buffalo wallows on the side of the road. Furthermore, Japanese troops would frequently beat and bayonet prisoners who began to fall behind, or were unable to walk. Once they arrived in Balanga, the overcrowded conditions and poor hygiene caused dysentery and other diseases to rapidly spread among the prisoners. The Japanese failed to provide them with medical care, leaving U.S. medical personnel to tend to the sick and wounded (with few or no supplies).[5] In June 2001, U.S. Congressional Representative Dana Rohrabacher described and tried to explain the horrors and brutality that the prisoners experienced on the march:

They were beaten, and they were starved as they marched. Those who fell were bayoneted. Some of those who fell were beheaded by Japanese officers who were practicing with their samurai swords from horseback. The Japanese culture at that time reflected the view that any warrior who surrendered had no honor; thus was not to be treated like a human being. Thus they were not committing crimes against human beings.[...] The Japanese soldiers at that time [...] felt they were dealing with subhumans and animals.[8]

Trucks were known to drive over some of those who fell or succumbed to fatigue,[9][10][11] and "cleanup crews" put to death those too weak to continue. Marchers were harassed with random bayonet stabs and beatings.[12] 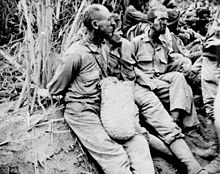 Prisoners on the march from Bataan to the prison camp, May 1942. (National Archives).
From San Fernando, the prisoners were transported by rail to Capas. One hundred or more prisoners were stuffed into each of the trains' boxcars, which were unventilated and sweltering in the tropical heat. The trains had no sanitation facilities, and disease continued to take a heavy toll of the prisoners. After they reached Capas, they were forced to walk the final 9 miles to Camp O'Donnell.[5] Even after arriving at Camp O'Donnell, the survivors of the march continued to die at a rate of 30–50 per day, leading to thousands more dead. Most of the dead were buried in mass graves that the Japanese dug out with bulldozers on the outside of the barbed wire surrounding the compound.[13]
The death toll of the march is difficult to assess as thousands of captives were able to escape from their guards (although many were killed during their escapes), and it is not known how many died in the fighting that was taking place concurrently.
Share:
Newer Post Older Post