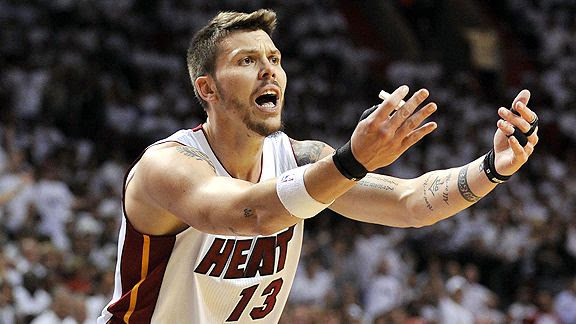 Of the 20 NBA amnesties thus far, nothing tugs the heart more than the case of Mike Miller. The 6-foot-8, 210-pound power forward said it himself, telling the Associated Press, "I understand. Very, very thankful for the opportunity that I've had, but it hurts."

It hurt, the Heat, too. So much so that the team went out of its way to thank Miller for his services in a full-page newspaper ad that cost $80,000. Team president Pat Riley said cutting Miller was "one of the toughest decisions" in his life while Heat owner and shipping magnate Mickey Arison tweeted that Miller will be a "Heat for life."

Apparently, the people running the Heat are full of empathy, but they had to make a gut-wrenching decision that appeared insensitive simply because it made business sense. At the end of the day, the NBA is a business, not a lovefest.

Picked by the Orlando Magic as fifth overall in the first-round of the 2000 NBA draft, Miller had stints with the Memphis Grizzlies, Minnesota Timberwolves and the Washington Wizards, but he made his mark in Miami, where he inked a five-year deal worth $29 million in 2010.

There is a lot to like about Miller, Florida alum, who went to the same school that produced a bullish freak of nature named Joakim Noah. Miller has a stroke of pure shooting genius, one that has a feathery touch and is 46.1 percent accurate throughout his 13-year NBA career. Miller hit big time when he sank seven 3s in Game 5 of the 2012 NBA Finals, the clincher over the Oklahoma City Thunder.

Outside the lines, Miller is an upstanding citizen who never had run-ins with the law and once donated $200,000 to the St. Jude Children's Research Hospital. He's the kind of dude fathers want their daughters to marry.

But his tenure in Miami was, sadly, ravaged by injuries. In his three years with the Heat, Miller missed 91 games, and since he is paid roughly $70,731 a game, that's a lot of money down the drain.

Now at 33 years of age, with worn knees and a troubling back, Mike is just old and creaky, like a long distance runner who is no longer able to catch that second wind.