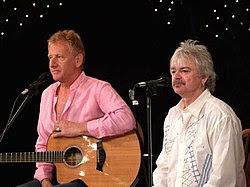 Air Supply is an Australian soft rock duo, consisting of Graham Russell as guitarist and singer-songwriter and Russell Hitchcock as lead vocalist. They had a succession of hits worldwide, including eight Top Ten hits in the United States, in the early 1980s.
They formed in Bitchfield, England in 1975 and have included various accompanying musicians and singers. They have sold more than 100 million albums.

Chrissie Hammond, Russell Hitchcock and Graham Russell met in May 1975 while performing in the Australian production of the Andrew Lloyd Webber and Tim Rice musical, Jesus Christ Superstar.With Hammond and Hitchcock on vocals and Russell on guitar, they formed a harmony vocal group in Melbourne, while the show was still playing. Hammond left the vocal group to form Cheetah and was replaced by Jeremy Paul (ex-Soffrok and later Divinyls) on bass guitar and vocals in 1976. Together, Hitchcock, Russell and Paul formed Air Supply. The group's first single, "Love and Other Bruises", was released in November, 1976 and peaked at No. 6 on the Australian Kent Music Report Singles Chart in January 1977. It was followed by Air Supply, their debut album, in December, which reached No. 17 on the Kent Music Report Albums Chart and achieved gold in Australia. The album was produced by Peter Dawkins (Spectrum, Ross Ryan) with Air Supply line-up as Hitchcock, Paul, Russell and drummer Jeff Browne, guitarist Mark McEntee and keyboardist, arranger Adrian Scott. Other singles were "If You Knew Me", "Empty Pages" and "Feel the Breeze" but none reached the Top 40. A national tour followed with Hitchcock, Paul, Russell and Scott joined by Nigel Macara (ex-Tamam Shud, Ariel) on drums and Brenton White (Skintight) on guitar.
Their second album, The Whole Thing's Started, also produced by Dawkins, was released in July 1977 with White replaced on lead guitar by Rex Goh. The album spawned the singles "Do What You Do" (June), "That's How the Whole Thing Started" (October) and "Do It Again" (February 1978) but neither album nor singles charted into the Top 40. From late 1977, the group supported Rod Stewart during his tour of Australia—he invited them to continue to the United States and Canada. Their third album, Love & Other Bruises, included re-recordings of some earlier tracks, was made mid-tour in Los Angeles in July–August and released later that year in the US on Columbia Records with Jimmy Horowitz producing.During the tour, Paul left the band with a new line-up of Goh, Hitchcock, Macara, and Russell, plus Joey Carbone on keyboards, Robin LeMesurier on lead guitar and Howard Sukimoto on bass guitar. Paul, in 1980, recruited fellow Air Supply bandmate McEntee in the lineup of Divinyls, fronted by Chrissie Amphlett. Air Supply performed in London supporting Chicago and Boz Scaggs.
Although their music had some commercial success, Russell claimed, on a 1995 DVD, that he and Hitchcock were so poor that they were reduced to checking the backs of hotel sofas for change so that they could buy bread to make toast. By early 1978 the line-up was Hitchcock, Macara and Russell, with Ken Francis on guitar, Rick Mellick on keyboards and Bill Putt (Spectrum, Ariel) on bass guitar. However, by mid-1978, only Hitchcock and Russell remained in the line-up, backed by Ralph Cooper (Windchase) on drums, Brian Hamilton (ex-Sailor) on bass guitar and vocals, and David Moyse (Sailor) on guitar.
In April 1979, the band released Life Support, a concept album which included a picture disc on its first printing. Session musicians included Mike Bukowsky on brass, Tommy Emmanuel on guitar, Frank Esler-Smith as arranger and keyboardist, Geoff Oakes on brass, Coz Russo on keyboards and Peter Walker (ex-Bakery) on guitar. Esler-Smith had been the orchestral arranger for the production of Jesus Christ Superstar where Hitchcock and Russell had initially met, and he would maintain a long association with Air Supply throughout his life. Produced by Charles Fisher (Radio Birdman, Ol' 55), the album was recorded in the Trafalgar Studios in Sydney, Australia where, as recalled on the 2005 DVD, he had half an inch between the end of his guitar and the studio wall. The album had a five-and-a-half minute version of "Lost in Love", written by Russell in 15 minutes; it was released as a single and peaked at No. 13 in Australia and No. 13 in New Zealand. The track caught the attention of Arista Records boss Clive Davis, who remixed the song and released it as a single in the US early the next year.

A re-recorded and remixed version of "Lost in Love" was released internationally as a single in January 1980 on Arista Records. The associated album, Lost in Love, appeared in March and contained three US Top 5 singles, including the title track which peaked at No. 3 on Billboard Hot 100 and No. 11 in the United Kingdom Singles Chart. The album was produced by former teen steel guitarist Robie Porter (Daddy Cool, Rick Springfield) for his Wizard Records label. The other US Top 5 singles were "Every Woman in the World" (No. 5) and "All Out of Love" (No. 2). Both singles were Top 10 in Australia with "All Out of Love" reaching No. 17 in the Netherlands.[4][8] During 1980, the line-up of Hitchcock, Russell, Esler-Smith, Cooper and Moyse was augmented by David Green on bass guitar, with Goh returning on lead guitar in 1981. The album sold three million copies in the US and peaked at No. 22 on Billboard 200.
Arista Records president Clive Davis teamed the group up with producer Harry Maslin. In 1981, Air Supply released The One That You Love, with the title track issued as a single which went to No. 1 on the Billboard Hot 100. It also featured two other Top 5 hits, "Here I Am (Just When I Thought I Was Over You)", written by Norman Saleet and "Sweet Dreams". A fourth single, "I'll Never Get Enough", co-written by Jeanne Napoli, Gary Portnoy and Judy Quay, was released in Japan and achieved Top 10 status.
Their next album Now And Forever, in 1982, continued the group's popularity with the Top 5 hit "Even the Nights Are Better" and two Top 40 singles, "Young Love" and "Two Less Lonely People in the World".
In 1983, they released their Greatest Hits album with a new single, "Making Love out of Nothing at All", written by Jim Steinman. The song was one of their biggest hits ever spending three weeks at No. 2, and the album eventually sold 7 million copies.
In 1983, Air Supply also released their first live video, Air Supply Live in Hawaii. In 1984, their song "I Can Wait Forever" was featured in a scene of the blockbuster movie Ghostbusters, and was included in the soundtrack album. In 1985, they had a Top 20 Billboard hit with "Just as I Am" from the Air Supply album, a couple of minor hits ("Lonely Is the Night" and "One More Chance") from the album Hearts in Motion released in 1986.
Russell and Hitchcock recorded a 1987 Christmas Album before taking a break as a band. During this time, Hitchcock released his self-titled album in 1988 which was not a big seller. However, he did have the single "Swear to Your Heart" in 1990 - from the movie soundtrack for Arachnophobia - which received significant airplay.

On 21 August 1989, using their old producer and welcoming the return of drummer Ralph Cooper, the duo decided to enter the studio again to record The Earth Is, which was released in 1991 by Giant Records under Warner Bros. Records. The recording contains their hit single "Without You," along with singles for "Stronger Than the Night" (with a music video announcing that Air Supply was back) and "Stop the Tears" and the album sold more than one million copies. Inside the album is a note about Hitchcock and Russell's original Musical Director of their meeting place during Jesus Christ Superstar (and long time Band Member/Orchestrator): "This Album Is Dedicated to the Memory of Frank Esler-Smith." Esler-Smith had died earlier that year (1991) from pneumonia.
The official fan club released The Earth Is World Tour video, a rare collector's item that contains live footage from the band's global tour in support of the album.
The album was followed by The Vanishing Race in 1993, which was supported by the hit single "Goodbye" produced by David Foster, with lyrics by Linda Thompson—which, although not popular in the United States, was critically praised and gained a large following outside the country, especially in Asia where in many countries they would reach number No. 1, and in Taiwan, Power Station & Terry Lin (a huge fan of Air Supply himself) covered it and cleverly called it "I'd rather love the sea/Shanghai rather than loving you" as a play on Shanghai's geographical relationship with the sea in 2009. This would lead to another world tour in 1993 which included Earth, Wind & Fire guitarist Dick Smith. "It's Never too Late" was another single released from the Vanishing Race. The album itself was dedicated to the plight of the American Indians, the "Vanishing Race" of the album's title, the album sold 4 million copies.
Their third album of the decade, News from Nowhere, was released in 1995. It contained the Asian hit singles "Someone", "Always", and a cover of "Unchained Melody", a song made famous by Al Hibbler.
Their popularity continued to soar in Southeast Asian countries, culminating in the release of Now and Forever: Greatest Hits Live, a CD and DVD recording of a live concert in Taipei, Taiwan, also in 1995, which stayed at the top of the Asian album charts for 16 weeks.

They continued to tour heavily throughout Asia and in select venues in the U.S., and continued to released the more adult contemporary titled The Book of Love (1997), Yours Truly (2001), and Across the Concrete Sky (2003). In 2005, they released a live CD/DVD recording, and performed in Havana, Cuba, becoming one of the first foreign bands invited to perform in the country. They were booked to perform two concerts, and played the first show on 7 July, the day before Hurricane Dennis hit the country. In high winds, their first concert had an audience of 175,000. Due to the hurricane, they could not play the second show. Fans staying at the same hotel as Air Supply on 8 July had to be content with Russell performing acoustically for them, as there was no electricity.
Their songs were featured in Mr. & Mrs. Smith, The Wedding Date and Bad Company (2002 film).
In 2006, they released an acoustic album, The Singer and the Song, and are gearing up for the release of their first studio album in three years, Zed. In support of the acoustic album, they made their first trip to India in May 2006. On 2 December 2006 the duo performed to a capacity crowd in Kingston, Jamaica. This was their second visit to Jamaica, having performed at the Air Jamaica Jazz and Blues Festival in January 2006. They also have been seen endorsing Time–Life's Classic Soft-Rock Collection. In 2007, Russell released his first adult contemporary solo album called The Future.
Russell made an appearance in Believe, a comedy about Multi-Level Marketing.
In 2008, based on their chart performance, they were ranked the 83rd best musical act of all time in Billboard Hot 100's 50th anniversary edition.
They appeared on the 19 December 2008, edition of Don't Forget the Lyrics.
The music video for All Out of Love is seen briefly in the 2010 Australian film Animal Kingdom.